* Co-sponsored by 71 countries, the resolution was adopted without a vote in 193-member assembly's Third Committee 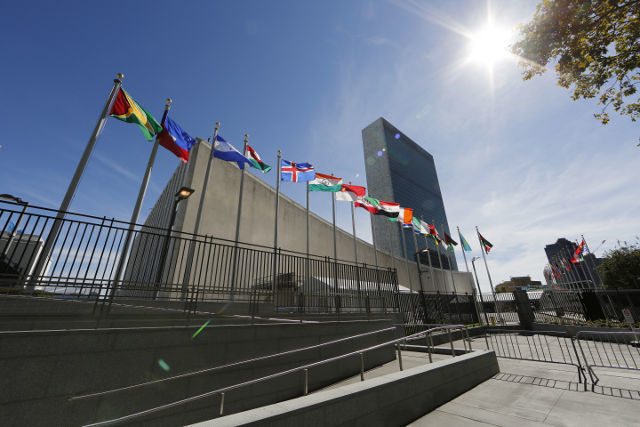 With Pakistan calling it a ‘beacon of hope’, a key committee of the United Nations General Assembly unanimously adopted a resolution reaffirming the right to self-determination for people who are subjected to colonial, foreign and alien occupation.

Co-sponsored by 71 countries, the resolution, submitted by Pakistan, was adopted without a vote in the 193-member Assembly’s Third Committee, which deals with Social, humanitarian and cultural issues.

The resolution, which Pakistan has been sponsoring since 1981, serves to focus the world’s attention on the struggle by peoples still struggling for their inalienable right to self-determination, including those in Kashmir and Palestine. It is expected to come up for General Assembly’s endorsement next month.

Introducing the draft, Munir Akram, Pakistan’s permanent representative to the United Nations, said the right to self-determination was a “cardinal principle” of the United Nations Charter and therefore a fundamental basis for all human rights and international law.

“By reaffirming the universal character of the right to self-determination, and its continued applicability in situations of foreign occupation and intervention, this resolution serves as a beacon of hope to those millions of peoples who are striving to realize this fundamental right, ” he said.

Attempts to unilaterally change the status of an occupied territory – legally or demographically – whose people have yet to exercise their right to self-determination were ipso facto null and void, the Pakistani envoy said in an obvious reference to India’s illegal action to revoke Jammu and Kashmir’s special status on August 5 last year when the disputed territory was placed under a repressive lockdown with internet and all communications cutoff.

While almost all former colonies and subjugated peoples have been able to exercise their right to self-determination through a “free and fair” referendum or a plebiscite conducted under the auspices of the United Nations, such as in East Timor and Namibia, there are some occupied peoples who have been denied this right and have been obliged to struggle for it, Ambassador Akram pointed out.

Those illegal actions, the Pakistani envoy said, constituted the gravest violations of the principles and purposes of the UN Charter, fundamental human rights, and international law.

“Recent history attests that the suppression of the right of peoples to self-determination results inevitably in violence and conflict,” Ambassador Akram said, adding that aggressors and occupiers have often attempted to justify their suppression of legitimate struggles for self-determination by portraying them as “terrorism”. “This twisted and self-serving canard of modern-day colonizers is being progressively exposed,” he said.

Under the terms of the draft, the General Assembly would reaffirm the universal realization of the rights of all peoples, including those under colonial, foreign and alien domination, to self-determination as a fundamental condition for the effective guarantee and observance of human rights. The resolution also declared the General Assembly’s firm opposition to acts of foreign military intervention, aggression and occupation, since these have resulted in the suppression of the right of peoples to self-determination and other human rights in certain parts of the world.

It called on those states responsible to cease immediately their military intervention in and occupation of foreign countries and territories, as well as all acts of repression, discrimination, exploitation and maltreatment. The assembly would also deplore the plight of millions of refugees and displaced persons who have been uprooted as a result of these acts and reaffirms their right to return to their homes voluntarily in safety and honour. It urges the Human Rights Council to give special attention to the violation of human rights, especially the right to self-determination, resulting from foreign military intervention, aggression or occupation. It also requests the Secretary-General to report to the next Session of the General Assembly on this question.