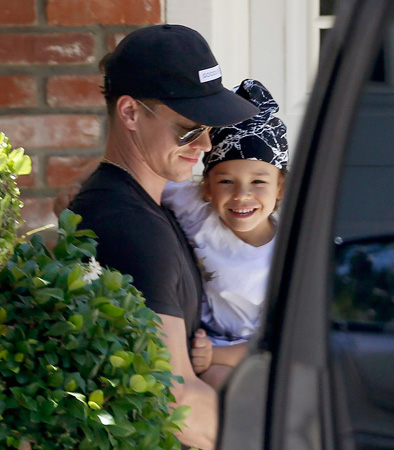 Through his father and legal guardian Ryan Dorsey, Josey asserted two causes of action in the lawsuit: wrongful death and negligent infliction of emotional distress. In regard to the first cause of action, court documents obtained by E! News claimed, “Josey has suffered substantial economic and noneconomic damages as a result of Naya’s death.” As for the second cause of action in the lawsuit, the documents alleged Josey suffered “serious emotional distress” as a result of being at the scene where his mother drowned.

Through personal representative Justin Stiegemeyer, the estate also asserted a survival cause of action in the lawsuit. Per the court documents, he brought this claim to “recover the loss or damage that Naya sustained or incurred before death, including any penalties or punitive exemplary damages that Naya would have been entitled to had she lived.” According to the paperwork, the plaintiffs are requesting a jury trial. It also said they’re seeking “actual, compensatory, consequential and punitive damages in amounts to be fixed at trial,” “reasonable attorneys’ fees and costs as available by law,” “pre-judgment and post-judgment interest,” and any “further relief as the Court deems appropriate.”

According to the paperwork, the plaintiffs are requesting a jury trial. It also said they’re seeking ‘actual, compensatory, consequential and punitive damages in amounts to be fixed at trial,’ ‘reasonable attorneys’ fees and costs as available by law,’ ‘pre-judgment and post-judgment interest,’ and any ‘further relief as the Court deems appropriate’

As fans will recall, Naya took Josey boating at Lake Piru, which is owned and operated by the defendants, on July 8, 2020. Naya rented a pontoon boat from PMC. The documents claimed the boat “was not equipped with a safely accessible ladder, adequate rope, an anchor, a radio or any security mechanisms to prevent swimmers from being separated from their boats.”

“Disturbingly, later investigation revealed that the boat was not even equipped with any flotation or lifesaving devices, in direct violation of California law, which requires all pontoons longer than 16 feet be equipped with flotation devices,” the lawsuit stated.

In addition, the paperwork claimed the pontoon rented to Naya “was one of the older rental boats available at Lake Piru” and that it “had not been refurbished.” Furthermore, the documents stated the pontoon “displayed signage inaccurately claiming that the boat complied with U.S. Coast Guard safety standards—which, given that those standards require safety equipment such as a life preserver, the boat surely did not.”

The allegations didn’t end there. The documents also noted “there is not a single sign anywhere…warning of the lake’s strong currents, low visibility high winds, changing water depths, underwater caves, ledges, and drop offs, or the trees, brush and other debris that congest its waters due to vastly changing water levels and winds.”

What’s more, the paperwork stated “there are no signs warning visitors about the dangers of swimming in the lake, to wear life vests when swimming or boating, or that dozens of others have drowned in Lake Piru,” noting that “at least 26 other people” have drowned in the lake since its recreational facilities opened. The court papers acknowledged PMC’s boat rental agent did offer the Glee star a life vest but that she politely declined it as the vest was optional. The documents alleged the unnamed agent did not warn Naya to wear the vest but rather put the vest in the rental boat. Back in July, authorities also stated that Josey, then 4, was wearing a life vest and that an adult life vest was found in the boat.

About two hours after Naya and Josey left the dock on the rental boat, they decided to swim in the lake, which the documents stated was permitted at the time but is now banned. The paperwork claimed the boat was then carried away while they were swimming and that this was “likely by current wind, which gusted up to 21 miles per hour that afternoon.”

In July, Ventura County Sheriff Bill Ayub said Naya’s “son described being helped into the boat by Naya, who boosted him on the deck from behind.” Ayub said the idea, perhaps, was that “the boat started drifting, it was unanchored, and that she mustered enough energy to get her son back onto the boat but not enough to save herself.” However, the court documents told a different story.

“Josey, who was closer, managed to get back on the boat on his own volition and braced himself on the boat, which was rocking back and forth forcefully in the current wind,” the lawsuit stated. “Josey knew Naya was still in the water, and heard her cry, ‘Help! Help!’ in her struggle to get back to the boat and avoid drowning.”

Per the paperwork, “Josey searched in vain for rope to help his mother get back on the boat.”

“Josey then looked back at the water for his mother, and saw Naya had disappeared,” the documents stated. “Josey yelled for help and cried alone in the boat until he was found more than an hour later by a PMC boat leasing agent.”

After a days-long search by law enforcement and emergency personnel, Naya was found dead on July 13. She was 33 years old. According to the lawsuit, her body was recovered in an “area where the water is 25-30 feet deep with an underwater shelf nearby that was 65-70 feet deep, and is congested with heavy debris and trees that rise up nearly 20 feet from the lakebed.”

The Ventura County Medical Examiner determined Naya’s cause of death to be drowning and her manner of death to be an accident. The late actress was laid to rest in Los Angeles in July. According to the court documents, the plaintiffs alleged the drowning was “utterly preventable” and claimed the “Defendants’ negligence was a substantial factor in causing Naya’s death by drowning.”

“Given Naya’s exceptional physical fitness, relative youth, strong swimming skills, and powerful love for Josey, she surely struggled mightly to make it back to the boat and succumbed to exhaustion over at least a few minutes,” the paperwork stated at one point. “During those minutes, Naya may not have known whether Josey made it back to the boat—as, despite Defendants’ inaccurate media reports, Naya did not boost Josey back onto the boat—but she surely knew that she was dying and would not make it back to her son.”