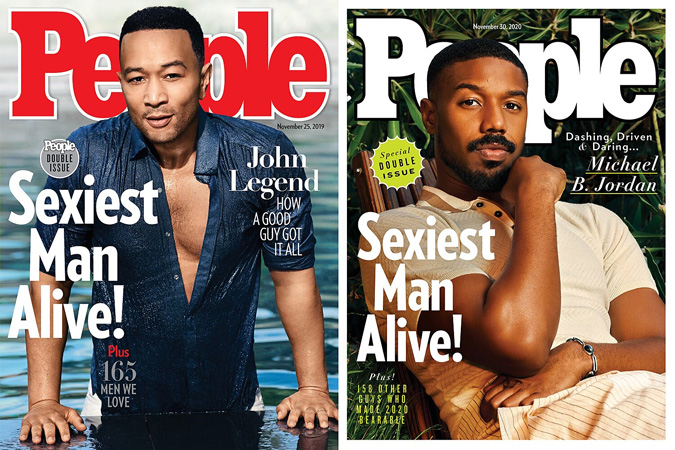 John Legend is free to enjoy wife Chrissy Teigen’s home cooking now that the pressure is off to maintain his “Sexiest Man Alive” title.

After People magazine named Black Panther star Michael B. Jordan as its 2020 titleholder, the singer tweeted on Wednesday, Nov. 18, “Congratulations to my brother Michael B! And thank you! I can now keep gaining this quarantine weight in peace without the pressure of a title to maintain.”

The magazine unveiled its 2020 pick on a Jimmy Kimmel Live! special on Tuesday, during which Jordan appeared onstage wearing a hazmat suit. “I think the expectation now is…it’s a little unreasonable,” Jordan joked. “Just a little bit. But it’s a cool title to have.” Before the announcement of the Sexiest Man Alive of 2020, Legend told People that while he has “appreciated the whole experience” of being the Sexiest Man Alive of 2019,” and has “been trying to have a lot of fun with it,” he was “so ready to relinquish this title.”

After Legend was given his title last year, Teigen poked fun at him on social media. The model, TV host and cookbook author joked that she has fulfilled her “dream of having boned @people’s sexiest man alive!! an honor!!!!!” Teigen also tweeted, “I cannot WAIT for people to get mad about John being the sexiest man alive. it’s my new Starbucks holiday cup.”

The Chrissy’s Court star later shared a video of herself asking their kids Luna and Miles if they “are so happy daddy is the sexiest man alive.” In response, their son babbled while Luna said, “I want to watch the movie, Mom.” Teigen joked, “The kids… do not care.”

Legend and now Jordan follow in the footsteps of past Sexiest Man Alive titleholders such as Blake Shelton, Idris Elba, Dwayne Johnson, Chris Hemsworth, Adam Levine, Channing Tatum, Bradley Cooper, Ryan Reynolds, George Clooney, Matt Damon, Hugh Jackson, Matthew McConaughey and Johnny Depp. “It’s a cool feeling,” Jordan told People. “You know, everybody always made that joke, like, ‘Mike, this is the one thing you’re probably not going to get.’ But it’s a good club to be a part of.”

Jordan also told the magazine that the women in his family “are definitely proud of this one.”

“When my grandmother was alive, it was something that she collected, and then my mom naturally reads it a lot and my aunts as well,” he said. “This is one that they’re definitely going to have a special place for.”