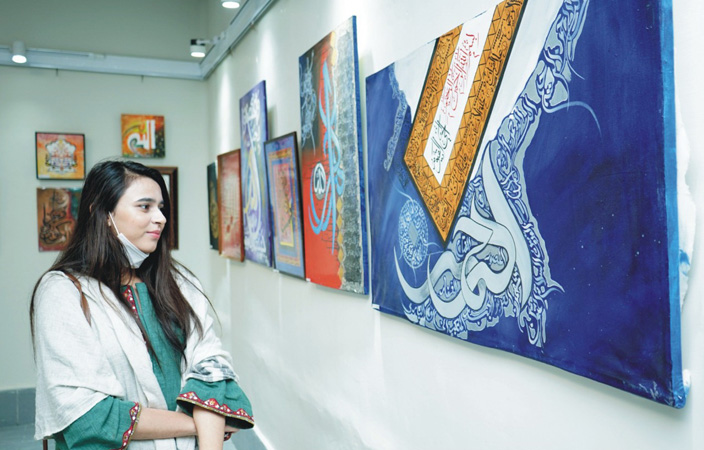 The University of Sargodha organized 2nd National Calligraphy Exhibition and Competition in connection with the celebrations of “Shan-e-Rehmatul-lil-Alameen (PBUH)” week.

Addressing the inaugural ceremony, Dr Ishtiaq Ahmad said that the life and example of the Prophet (PBUH) is a beacon of light for humanity and the world could be made a haven of peace by following the teachings of the Holy Prophet (PBUH). “We have organized various events in connection with the celebrations of “Shan-e-Rehmatul-Lil-Alameen (PBUH)” week. Our aim is to promote Islamic teachings among youngsters and to encourage and motivate them toward learning the intricacies of Islam.”

Above 50 artists from across the country show cased their work including blend of modern and traditional calligraphy, ceramics and glass work at the art show. The artists used different styles of modern and ancient calligraphy to present their work like Kufic Mazhfur, Andalusia Kufi with poster colors, water colors, shell gold, Thulth Jali, Nastaliq, devani, maqos, and Acrylic colors.

About 100 pieces of artwork featuring calligraphy by established and upcoming artists from across the country were exhibited. The competition was classified into three categories including divisional level girls, boys and at national level as well.

Saqib ali was declared first among all the boys while Ameer Hamza stood second and Muhammad Muaz Ahmad and Measum Mehdi were bagged third position.

At national level competition, the art work of six calligraphers were acknowledged prominently in which Saima Ashfaq Abbasi from Lahore got the first position whereas Zaki Sheikh from Bhalwal, Muhammad Shoaib from Mandi, Nisar Ahmad from Faisalabad, Waqas Yahyah from Kasur, Rahi art from Sindh bagged remaining positions respectively.