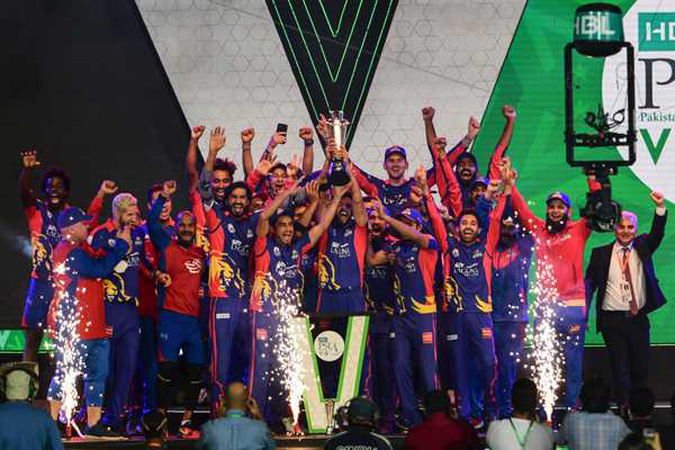 KARACHI: Imad Wasim, Karachi Kings’ captain, on Tuesday night hailed the contribution of the late Dean Jones to the franchise’s title win after they beat Lahore Qalandars to lift the Pakistan Super League trophy for the first time. Jones died suddenly in Mumbai, where he had been working as a broadcaster for the IPL, following a cardiac arrest in September at the age of 59. Having previously coached Islamabad United to two of the first three PSL titles, Jones was appointed as Karachi’s coach ahead of the fifth edition in March, which was abandoned immediately before the playoff stage due to the Covid-19 pandemic. Jones was something of a legendary figure at the PSL, usually seen writing notes in his famous red book in his team’s dugout. Karachi paid him tribute before their Qualifier against Multan Sultans, forming a ‘D’ shape on the outfield and observing a moment’s silence. They also carried a cardboard cut-out with them throughout the playoffs, with “We miss you!” emblazoned on its side. Speaking in the post-match presentation after hitting the winning runs, Imad acknowledged the contribution that Jones had made to the franchise, as well as thanking Wasim Akram ––- who stepped in as his replacement during the playoffs –– for his role.

“Dean Jones, of course, gets credit because what he taught us, very few coaches in the world can,” Imad said. “Wasim Akram, of course, deserves the trophy because he was our bowling coach, head coach, mentor and team president rolled in one. It’s an honour to captain this franchise.” Imad admitted that like his opposite number Sohail Akhtar, he had misread the pitch and would also have chosen to bat first if he had won the toss. But he said that his bowlers ––– in particular, the unheralded trio of Arshad Iqbal, Waqas Mahmood and Umaid Asif –––- had stepped up at the right time.

“The way the bowlers bowled was fantastic,” he said. “We misread the pitch somewhat, too, because we wanted to bat first, too. The bounce wasn’t true, and so we varied our pace and lines, and I think our bowlers executed their plans perfectly. “We knew if Babar Azam put on a masterclass we could effectively put our feet up in the chase. Obviously anything can go wrong and in the end we lost a couple of wickets all of a sudden, and that’s why I’d decided to go in lower down the order, so we’d have some security at the end. Generally, when I bowl the first over, I can get a read of the wicket. Arshad Iqbal was an emerging cricketer but he played a crucial role for us today. If the fans had been around, it would have made it even sweeter.”

Azam, who won the match award in the final, finished top of the run-scoring charts and was named player of the tournament, said that he had tried to stay as cool as possible in the middle, despite the loss of three late wickets as the Kings closed in on victory. “It’s been a great year for me, but today, I just needed to remain cool,” he said. “The team was depending on me and I needed not to panic. The wicket was slow and I wasn’t feeling the ball on the bat very well. I feel the calmer you are, the better you perform. Because sometimes the way you’ve planned things doesn’t reflect what happens out in the middle. I just knew I had to be there at the finish, and in the end we chased it with ease”. Akhtar, the losing captain, admitted that his side had fallen a long way short with the bat. But having finished bottom of the group stage in each of the past four editions of the PSL, he said that reaching the final was a sign of “great progress”.