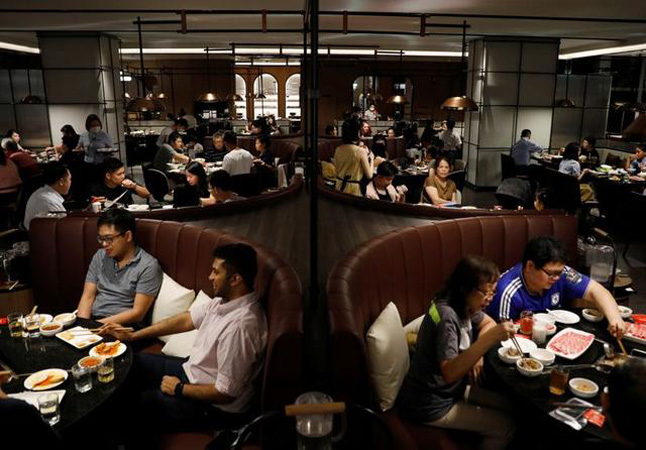 China’s biggest hotpot chain Haidilao will open more than 400 new restaurants in 2020, exceeding initial estimates by about a third, even as the coronavirus pandemic batters its and the sector’s profits. The restaurant industry has been among the worst hit by the global health crisis that has forced people to stay at home and businesses to shut, prompting some analysts to caution against the fast pace of new openings by Haidilao. But Haidilao’s chief strategy officer Zhou Zhaocheng said: “This is a comfortable pace for us, and we don’t see any issues.” Most of the new restaurants will be opened in mainland China, and less than 10% overseas, he added in Mandarin during an interview in Singapore. The company had initially planned to open around 300 restaurants in 2020, versus 308 new openings in 2019. Haidilao, which started in 1994, offers a communal dining experience where patrons cook plates of meat and vegetables in a soup at the centre of their table. Its founder Zhang Yong has been ranked among China’s richest people, according to Forbes, and became Singapore’s wealthiest person in 2019 after taking up citizenship in the city-state. The chain’s business has come under pressure this year amid the pandemic. It reported a loss of 965 million yuan ($147 million) for the first half, down 205.7% from a year earlier. Analysts expect Haidilao’s annual profit to more than halve from 2019, Refinitiv data shows. But a nearly 80% rally in its shares this year indicates investors are optimistic of a quick recovery. The bulk of Haidilao’s more than 900 restaurants is in China where the coronavirus outbreak has been controlled, underpinning the optimism. Haidilao has also opened new stores this year in Britain, Canada, the United States, Southeast Asia and South Korea as part of an expansion drive. Zhou said the pandemic has offered a chance to expand as other restaurateurs have shut down. “This is an opportunity for us,” Zhou said. “Many properties are affected, so you have a different level of bargaining power.” Expansions have been mainly funded by money raised during a 2018 listing in Hong Kong and existing cash flow, Zhou added. Haidilao secured a 2.1 billion yuan loan from China’s Citic Bank and AIBank this year to help weather the impact of the pandemic, which has killed over 1.3 million people globally. It is also considering a US dollar bond offering for an undisclosed amount.