Thai lawmakers vote on constitutional change in face of protests 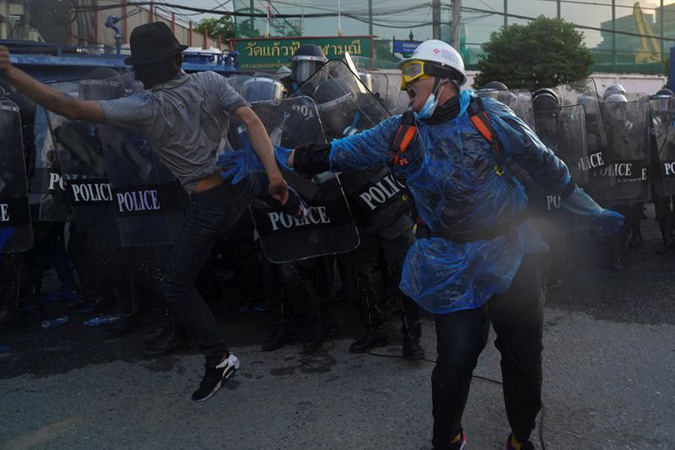 Thai members of parliament voted on Wednesday on options for changing the constitution, with most of them opposed to a demand from protesters for a proposal that could mean changes to the role of the powerful monarchy.

The vote comes after the most violent day since July of youth-led protests that seek to rewrite the constitution, to remove Prime Minister Prayuth Chan-ocha – a former junta leader – and to reform King Maha Vajiralongkorn’s monarchy.

Prayuth’s supporters have a majority in the parliament, where the entire upper house Senate was appointed by the junta he led after a 2014 coup.

Only one of seven proposals for constitutional reform would potentially allow amending the role of the monarchy, which protesters say has enabled decades of military domination in the Southeast Asian country.

The government has said it is ready to amend the constitution but not to touch on the monarchy.

“The government coalition will vote to accept two drafts, which do not change articles related to the monarchy, but refrain from voting on the iLaw draft,” government whip Chinnaworn Boonyakiat told Reuters, referring to a proposal from the iLaw human rights group that would allow for the monarchy’s place to be discussed.

Individual voting on each proposal by the 487 elected members of parliament and 245 senators was expected to take several hours.

“We need to protect the monarch,” senator Seri Suwanphanon said as he spoke against the iLaw proposal, which is backed by protesters and many opposition members of parliament.

“If we want solutions for our country, we need to adopt the iLaw draft,” said Pita Limjaroenrat, leader of the opposition Move Forward Party.

“While we were sitting in an air-conditioned room, officers used violence on many people,” he said referring to protests outside parliament on Tuesday that left at least 55 people hurt, several with gunshot wounds.

Police repeatedly used teargas and water cannon to try to push back protesters who eventually made their way past barricades to the gates of parliament. Protesters also scuffled with yellow-shirted royalist counter-protesters.

Bangkok’s Erawan Medical Centre said at least 55 people were hurt, with 32 suffering from teargas and six with gunshot wounds.

Police said they had confirmed two gunshot wounds – one to a protester and the other to a royalist – and they were investigating. Bangkok deputy commander Piya Tavichai defended the police response to the protest.

Another protest is due on Wednesday close to the police headquarters in central Bangkok.

Among constitutional reforms being discussed is the place of senators. Government critics say they ensured Prayuth kept power after last year’s election. He says the vote was fair and has rejected calls to resign. The Royal Palace has not commented on the demands for reforms to the monarchy that would make it accountable under the constitution.