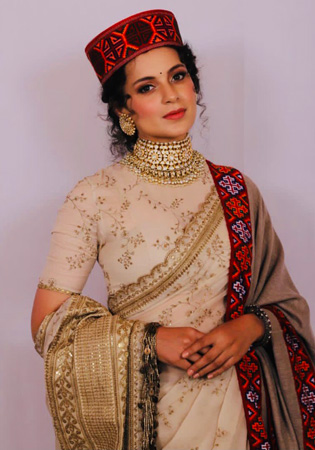 Dressed in the traditional “pahadi” attire, actor Kangana Ranaut on Sunday treated her fans to a video of herself dancing to a folk song from the mountains. The `Queen` actor who has been sharing glimpses from her cousin brother`s wedding ceremonies, took to Twitter to share the video. The video sees Kangana dancing with other women from her family on the `Kangari` song sung by Pahadi artists at her brother`s wedding reception. She explains the meaning of the song to her fans and followers as she penned a note along with the note. “I love folk music of any tradition for that matter, here`s a Kangari song sung by Pahadi artists at my brother`s dham today, meaning is simple….a woman expressing her love for her mother,” she wrote on Twitter. The `Tanu Weds Manu` actor is also seen decked up in the traditional `pahadi` attire as she is seen donning an off-white coloured saree with a `Pahadi` cap and matching shawl. Kangana is currently staying with her family at her hometown in Himachal Pradesh`s Manali.