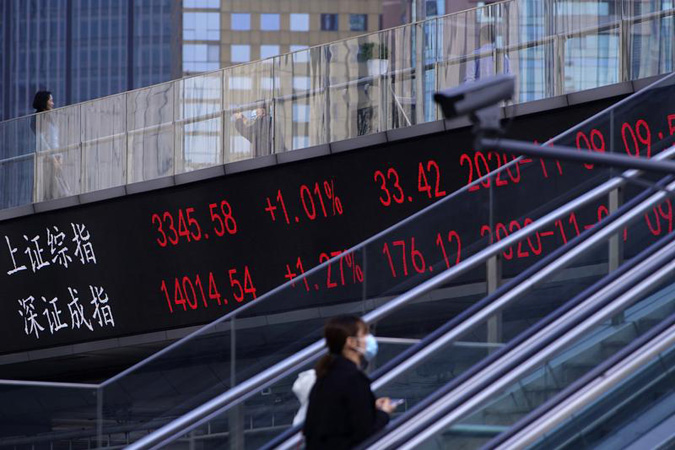 Asian stocks hit a record high on Monday as vaccine optimism and strong economic data from China and Japan outshone worries about rising coronavirus cases, lifting just about every sector. MSCI’s broadest index of Asia-Pacific shares outside Japan gained 1% to hit its highest since its launch in 1987 with markets across the region making milestone peaks. Japan’s Nikkei traded at 29-year highs, South Korea’s Kospi at its highest since early 2018 and Australia’s ASX 200 hit an eight-month peak in the morning, before a glitch halted trade. S&amp;P 500 futures rose 0.6% following the index’s record close on Friday, Nasdaq 100 futures leapt 1% and European futures were up strongly with EuroSTOXX 50 futures up 0.8% and FTSE futures up half a per cent. “There’s just mountains of cash sitting on the sidelines, waiting to be put to work and since we’ve got this vaccine news, as well as diminished risk around the U.S. elections, all of this is flying into equities,” said Kyle Rodda, an analyst at IG Markets. “Everyone’s thinking now that it’s the cue to get in.” Currencies and commodity markets were a little more circumspect, but the dollar was down a tad against trade-exposed currencies and oil prices firmed after falling on Friday. Japanese economic growth, which beat records and forecasts to pull the world’s third-largest economy out of recession and better-than-expected industrial output in China added to the enthusiastic mood, as did a weekend trade deal. While light on detail, 15 Asia-Pacific economies, including China and Japan, but excluding the United States, agreed to reduce future tariffs at a time of rising protectionism elsewhere.

REASONS TO BE CAUTIOUS

The flow driven gains came despite plenty of reasons to worry. U.S. President Donald is digging in for a drawn-out transition to President-elect Joe Biden. Axios reported that Trump plans a flurry of aggressive policy moves against China in the coming 10 weeks. Coronavirus cases are surging in Europe and the United States and new outbreaks have emerged in South Korea, Japan and Australia. Brexit talks are at delicate crossroads, again. A wave of state-owned enterprise defaults in China has also spooked mainland bond investors. A few of these fears kept currency market moves in check and left oil, a proxy for global growth, well below last week’s peaks as traders brace for a grim winter ahead. “The risk of even tighter restrictions loom in order to contain the spread of the virus,” said Commonwealth Bank of Australia commodity analyst Vivek Dhar. “Oil demand is particularly exposed to restrictions that limit mobility since transport accounts for two thirds of global oil consumption.” On the Brexit front, the departure of hardline adviser Dominic Cummings from Downing Street is seen as a positive, perhaps allowing more British concessions, but chief negotiator David Frost said on Twitter that talks “may not succeed”. Sterling crept higher against the dollar and euro. The common currency rose 0.1% against the dollar to $1.1848. The kiwi rose 0.5% to $0.6883 while the Australian dollar lagged a tad ahead of a week of central bank speeches and significant data, beginning with Reserve Bank of Australia Governor Philip Lowe at 0840 GMT. A slew of U.S. Federal Reserve speakers are also up this week, beginning with Vice Chair Richard Clarida at 1900 GMT. Bonds, which had sold off strongly on vaccine news last week, were steady with where they left off on Friday, with the yield on benchmark U.S. 10-year debt at 0.8930%, down from last week’s high above 0.97%. Oil prices inched higher, with Brent crude futures up 0.7% at $43.08 a barrel but below last week’s two-month high of $45.30. U.S. crude rose 1% to $40.55 a barrel. Gold rose 0.4% to $1,896 an ounce.