* Ban imposed on gatherings of more than 300 people; all PTI rallies cancelled countrywide
* No indoor marriages; only outdoor events with a maximum of 300 guests allowed
* Decision on extended winter vacations in schools next week
- Authorities to ensure use of masks in closed, crowded spaces 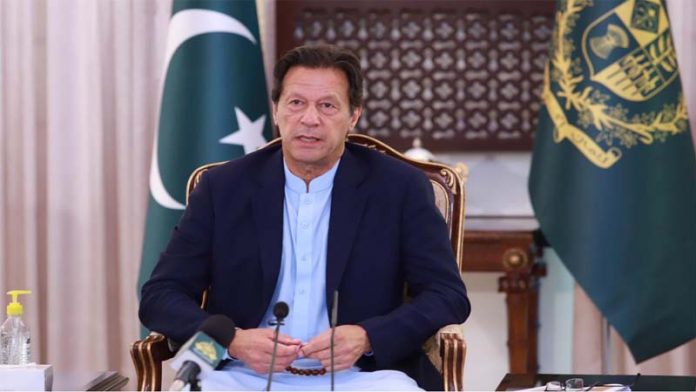 Prime Minister Imran Khan on Monday urged people to act as a nation and follow coronavirus-related standard operating procedures (SOPs), warning that infections in Pakistan have quadrupled over the past 10 days.

Addressing the nation following a meeting of the National Coordination Committee (NCC) on coronavirus, the prime minister announced a moratorium on political rallies and gatherings, but emphasised that businesses would not be closed yet, a private TV channel reported. He also announced a ban on gatherings and crowds of more than 300 people, but said outdoor dining arrangements in restaurants and outdoor weddings were fine. He said testing in schools was underway and a decision on extension of winter holidays would be made after a week.

“We reviewed the rising cases of the COVID-19 and the second wave – which is being experienced in the entire world, especially Europe and America, where cases are rising rapidly and even more than they were before,” Imran Khan said. “In America, coronavirus cases have risen beyond the first peak and we see the same in England. They have started lockdowns; just like they shut down their countries earlier, they’ve gone towards the lockdowns again. We were observing how many cases there are in the provinces. So, first off, I wish to tell you that God was especially benevolent towards us. We are a very lucky nation – see our neighbours Iran and India. God was especially kind to Pakistan, we were saved from the havoc the coronavirus wreaked in the rest of the world and in our neighbouring countries,” he said. “We are thankful to God that our country was saved from the coronavirus deaths, and secondly, we also saved our economy from destruction, as compared to what’s happening in the other nations,” he added.

The prime minister regretted that Pakistan’s service sector sustained a lot of damage during the first lockdown. “For example, tourism, marriage halls, and restaurants – this is quite a large sector and it was hit significantly when we shut down our economy,” he said. “Despite that, Pakistan – as opposed to the rest of the countries – performed much better during the first wave,” he noted. “However, it is with sadness that I say this today that our cases have quadrupled over the past 10 days – they rose four times – and deaths have shot up to 25 on average [per day] as compared to five or six a day earlier.

The prime minister said his government feared that not following SOPs would lead to the same pressure building on hospitals as was seen back in June. He warned the country that medical facilities in major cities would soon be full given “the speed at which patients are being admitted” at present. “God forbid our situation worsens further! We have already seen that it spread even faster than before in the rest of the world,” he said.

PM Imran Khan noted that the coronavirus seems to be mutating and is spreading faster than before. “I request my nation that this is the time to take precautions. If we do that, we will be able to stop and slow it down, the same way all of us – everyone in the nation – took precautions earlier and we were saved [because of them]. We have to do the same again, because that time has come. Face masks are the easiest precaution,” the premier said. “We just need to slow it down. It will spread nonetheless but if we slow down its speed, then our hospitals will not come under pressure because our main goal is that we do not want our hospitals to be filled up or our doctors and nurses to face the pressure they faced in June,” he added.

He warned that if the situation went back to how it was in June, “we will face challenges, as we have seen the conditions that the rest of the world is experiencing right now, especially Europe and India”. The government had made several decisions, he said, and those needed to be followed “the same way the nation stood with us [and] fought [coronavirus] together and we were saved”. “The first precaution is to wear face masks wherever you go in public and, secondly, we know that the COVID-19 pandemic spreads whenever people are close together and the more the number of people are close together, the quicker it spreads,” he said.