PTI on top with 10 seats in GB polls; set to form government

* Seven out of 23 seats of legislative assembly won by independent candidates
* PPP could win on three seats, followed by PML-N's victory on two seats 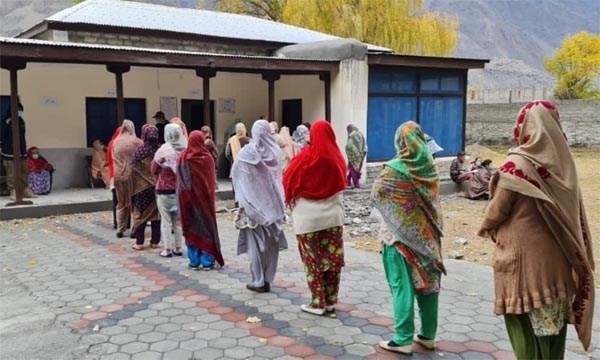 According to the unofficial results, the PPP was able to win on three seats followed by the PML-N with two seats, according to Radio Pakistan. As many as 330 candidates, including four women, are vying for the 24 general seats in the third legislative assembly of Gilgit-Baltistan.

Prime Minister Imran Khan on Monday expressed happiness over the victory of Pakistan Tehreek-e-Insaf (PTI) in GB polls and said that voters have rejected Pakistan Democratic Movement (PDM)’s narrative. Chairing a meeting of party spokespersons and PTI leaders in Islamabad, the prime minister said that the people of Gilgit-Baltistan have rejected the anti-state narrative of opposition. “Opposition parties only aim is to safeguard their personal interests,” he said at the meeting. The voting process in the region, which mostly went peacefully, began at 8am on Sunday and continued until 5pm without any interval. Polling in most constituencies went smoothly throughout the day. In Gilgit city, women and the elderly showed their enthusiasm and turned up in numbers at polling stations to cast their votes. However, in Ghizer, Hunza, Sost and Baltistan heavy snowfall continued, restricting citizens to their houses. Polling in one constituency was postponed, according to Radio Pakistan.

Minutes before closing of polling on Sunday, PPP vice president Sherry Rehman held a news conference in Gilgit and alleged that a number of election observers of the Free and Fair Election Network (Fafen) had been removed from the polling stations before the start of the counting process. Meanwhile, PPP Chairperson Bilawal Bhutto-Zardari, on Monday claimed that the election was “stolen”, adding that he was heading to the region to join a protest against the unfair polls. Speaking at a protest in GB shortly after, the PPP Chairman said the GB Election Commission, which was trusted with conducting a transparent election, had failed to protect the people’s votes and had instead “targeted the opposition”.