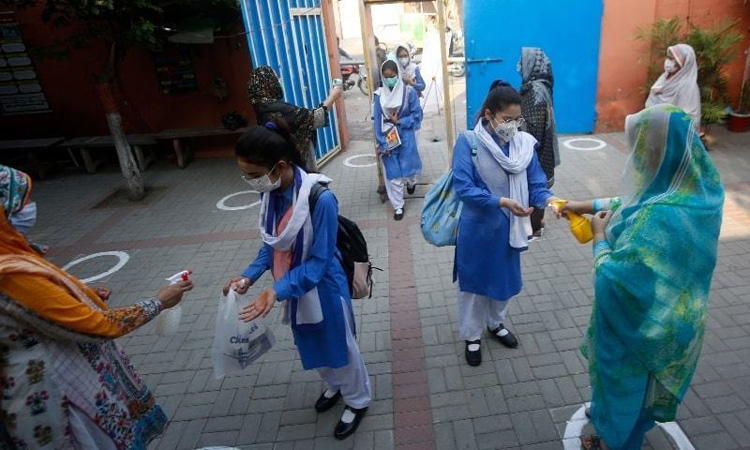 A decision on early and extended winter vacations, in view of the rapidly increasing number of coronavirus cases in the country, has been deferred till November 23.

This was announced by the Ministry of Federal Education/Professional Training after Federal Minister for Education Shafqat Mahmood convened a special meeting to deliberate the plan of action of educational institutes with provincial education ministers.

According to the statement, provincial ministers apprised the forum about the latest coronavirus situation and the impact on the education sector in their regions, but no final decision was taken about vacations and closure of schools.

The Inter-Provincial Education Ministers’ Conference (IPEMC) will meet again on November 23 at 11:00 am to review the situation. Apart from the education ministers, the meeting was also attended by officials of health ministries and the National Command and Operations Centre.

KP Minister for Elementary and Secondary Education Shahram Khan Tarakai also confirmed that the schools will remain open in a tweet. Earlier in the day, Punjab Minister for School Education Dr Murad Raas had said that the decision on school closure would be deferred till next week.

“No decision made on closure of Schools in Punjab today. The next meeting will be on Monday 23rd November 2020 for further review of the COVID 19 situation,” said Murad Raas. “All options are being discussed. No immediate decision for now.” The meeting had been called last week following the National Command and Operations Centre’s (NCOC) recommendation to announce early and extended winter vacations for schools due to the rising positivity rate in educational institutes.

The Inter-Provincial Education Ministers’ Conference (IPEMC) was presided by Federal Minister for Education Shafqat Mehmood and was attended by provincial education ministers via video link.

During the conference, officials from the National Command Operation Center (NCOC) and other departments briefed the forum on the current status of Covid-19 cases in the country. Keeping the current situation in mind, consultations were held in regards to the early closure of schools for winter vacations and extending the break. The forum proposed commencing winter break from November and continuing it till January. However, a consensus could not be achieved and the participants of the forum decided to review the situation again next week. Punjab Education Minister Murad Raas said “all options are being discussed” and no immediate decision was taken during the meeting.