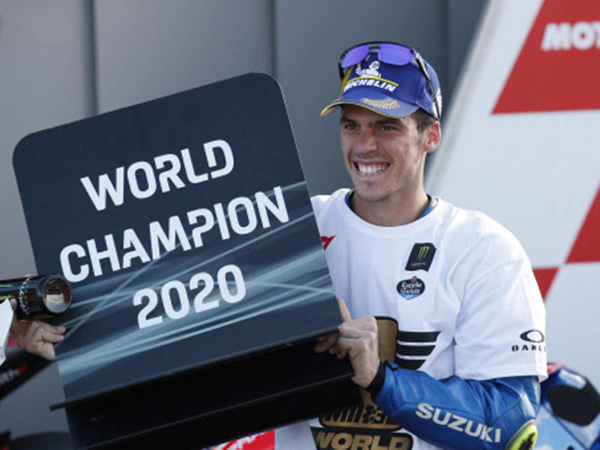 VALENCIA: Suzuki rider Joan Mir clinched his maiden MotoGP crown and became the Japanese team’s first world champion in two decades with a seventh-placed finish at the Valencia Grand Prix on Sunday. Mir began the race with a 37-point lead over his closest challengers Fabio Quartararo of Petronas Yamaha and Suzuki team mate Alex Rins, and secured a fourth successive top-10 finish from 12th on the grid to emulate American Kenny Roberts Jr., who won the riders’ championship for Suzuki in 2000.

“Unbelievable. I don’t have words to describe this emotion because it’s something that I’ve been fighting for all my life,” the 23-year-old Spaniard, who won the 2017 Moto3 world title, said. “To finally get this result at the moment I can’t laugh, I can’t cry. It’s a mix of emotions. I’m really, really happy. I need some time now to relax to understand what happened because I don’t have words.” With one race to go, Mir has an unassailable 29-point lead over Petronas Yamaha’s Franco Morbidelli, who withstood a spirited challenge from Pramac Racing’s Jack Miller to seal his third victory of the season. Pol Espargaro of KTM completed the podium.

Mir’s Suzuki team mate Rins, who qualified in 14th, stormed out of the blocks to make up seven spots in the first two laps as he battled to keep his title hopes alive. But the Spaniard managed only a fourth-place finish, leaving him 33 points behind Mir. Quartararo’s title challenge ended with a whimper as the Frenchman crashed out of the race on lap nine after starting from 11th. Mir’s success is a reward for consistency in a season that did not start on schedule on March 8 as several races were postponed because of the coronavirus pandemic. The Spaniard’s title quest got off to the worst possible start when action resumed in July, as he failed to finish in two of the season’s opening three rounds. With two wins in the same period, Quartararo emerged as the early favourite to end the four-year title reign of Spaniard Marc Marquez who suffered a season-ending arm injury in the opening round in Jerez.

But Mir finished on the podium in six of the next eight races, including a first victory at the European Grand Prix, to take control of the championship. Suzuki, searching for their first constructors’ championship since 1982, are tied with Ducati on 201 points heading into next weekend’s season finale at the Algarve International Circuit –– MotoGP’s reserve track in Portimao, Portugal.