PTI leading the contest in GB

* 745,361 people were registered to exercise their right to vote at 1,234 polling stations in 24 constituencies in Gilgit-Baltistan
* Police, GB Scouts, Rangers and FC personnel deployed at sensitive stations 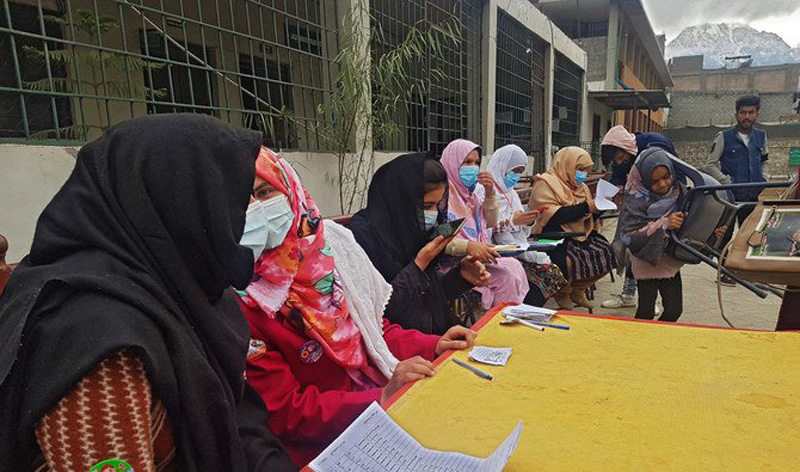 The PTI is leading in nine constituencies followed by PPP whose candidates are leading in five constituencies, unofficial, provisional results show as counting of votes continued in Gilgit Baltistan on Sunday.

According to preliminary results, independent candidates are leading in four constituencies while PML-N, Islami Tehreek Pakistan, Majlis Wahdat-e-Muslimeen and the JUI-F have the upper hand in one constituency each.

In one constituency, the election was postponed due to the death of a candidate.

With political rallies and events of the last few weeks fresh in their minds, the people of Gilgit-Baltistan headed to the polls to elect their third legislative assembly. The voting began at 8:00am and ended at 5:00pm sharp.

According to data obtained from the GB Election Commission, a total of 745,361 people have registered to vote on Sunday, 339,992 of whom are women. Nearly 1,234 polling stations have been set up in the 24 constituencies, of which 415 have been declared extremely sensitive.

GB Chief Election Commissioner Raja Shahbaz Khan expressed satisfaction over the election arrangements, process and security related matters during his visit to the different polling stations of GBA-1 and GBA-2 constituencies. Speaking to the media, he said the process of polling continued smoothly throughout the day and no complains or reservations were received from any candidate or voters across the region.

However, expressing concerns over transparency of polls, PPP Parliamentary Leader in the Senate Sherry Rehman said, “There are more than 600 members of the Free and Fair Election Network monitoring the election but some have been removed from the polling stations”. “Members of FAFEN must be given full access and all observers should be allowed inside during the counting of votes as their absence will only create more questions and cause controversy. It is also important that the Election Commission takes strict action,” she said while speaking to the media.

PTI Senator Faisal Javed Khan said that his party would win the GB election with thumping majority to form its government in the region. The GB general election was held in transparent manner as a large number of people came out of homes to cast vote to PTI candidates, he said while speaking to state-run PTV. Faisal said both PPP and PMLN had observed and accepted their defeat in the elections. The politics of Pakistan Democratic Movement (PDM) has ended now, he added.

Police, GB Scouts, the Rangers and FC personnel were deployed at the sensitive stations to ensure a smooth election process, although GB Caretaker Chief Minister Mir Afzal earlier announced that they would not seek the Pakistan Army’s assistance for the polls.

On Saturday, GB Chief Election Commissioner Raja Shehbaz Khan had reviewed security arrangements at polling stations in Gilgit city. He had also visited the election cell of the GB police department, where he received a briefing on the arrangements from police.

Special Assistant to Prime Minister (SAPM) on Political Affairs Shahbaz Gill on Sunday said that PML-N leader Maryam Nawaz was raising an unnecessary hue and cry over the Gilgit Baltistan elections as the party had not fielded candidates on 17 seats. “PML-N has fielded six candidates for GB elections, leaving 17 seats vacant,” he said and asked as to where voters would stamp their ballot if there is no election symbol of the party on ballot papers of 17 constituencies. He blamed the PML-N for securing victory in past elections through rigging and said that Maryam Nawaz is also following the footsteps of her father, Nawaz Sharif. “People have now become aware of their politics and will no more pay heed to their calls,” Shahbaz Gill said. He said that the PTI is in a strong position in the GB polls, however, he would not make claims of victory as made previously by Nawaz Sharif ahead of the final results. The SAPM further announced that independent candidates would also join PTI after winning the election from Gilgit Baltistan seats.

GB’s modern history can be traced back to the 19th century. In 1846, after many wars and bloodshed, the Dogras incorporated the region into the princely state of Jammu and Kashmir. The relationship remained intact till 1947 when GB ousted the Dogras and offered to join Pakistan unconditionally.