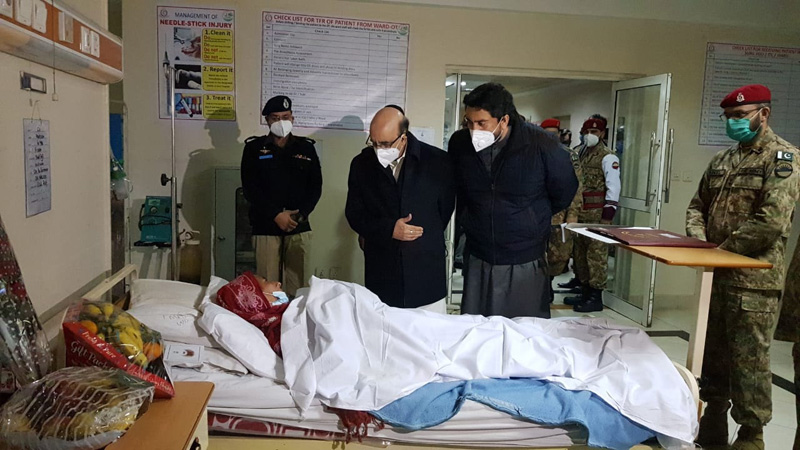 Chairman of the Parliamentary Committee on Kashmir Shehryar Khan Afridi Sunday said that the Indian Prime Minister Narendra Modi’s jingoistic designs are threat to regional and global peace and world leaders must take cognizance of the evidence presented by Pakistan of Indian state terrorism to destabilise Pakistan.

Mr Afridi was speaking to media here following his visit to CMH Hospital and inquiring after the health of the civilians got injured in Indian shelling at the Line of Control (LoC).

Flanked by President Azad Jammu and Kashmir Sardar Masood Khan and other officials, Shehryar Afridi said that he was visiting the injured as directed by Prime Minister Imran Khan to ensure best facilities to the injured Kashmiris and their families.

He said that Pakistan stands by its Kashmiri brethren and would keep providing them diplomatic, moral and political support against Indian occupational forces.

“We have and we will fight back India’s expansionist designs. I would urge United Nations Secretary General Antonio Guterres and other world leaders to take notice of evidence presented by Pakistan of Indian state terrorism and take action,” he said.

“World must fight India-backed terrorist Daesh now. Afghanistan must not allow India use its soil. We have generously hosted four million Afghan refugees for four long decades and also helped Afghan peace process to succeed. Afghanistan must now allow hostile forces and Indian intelligence to use Afghan soil to destabilise Pakistan,” he added.

Afridi said that people on the LoC are happy with Pakistan’s support and are ready for any sacrifice for Pakistan. India will never succeed in its expansionist ambitions, he added.

“India has become hostile to all its neighbours and countries of the region.

India’s successive and unabated violations of the LoC ceasefire are challenge for the United Nations and the world community,” remarked Afridi.

He said that on the one hand, India raises the slogan of Rising India while on the contrary, it puts the peace of entire region in a jeopardy under its expansionist agenda.

He lauded the swift medical help by CMH doctors and the Prime Minister of Azad Kashmir for the timely medical assistance to the injured Kashmiris. “Salute to the resolve of the people living along the LOC who have become a symbol of resistance against Indian shelling. I also salute the bravery of our valiant forces fighting the enemy at the LoC and working boundary,” he concluded.