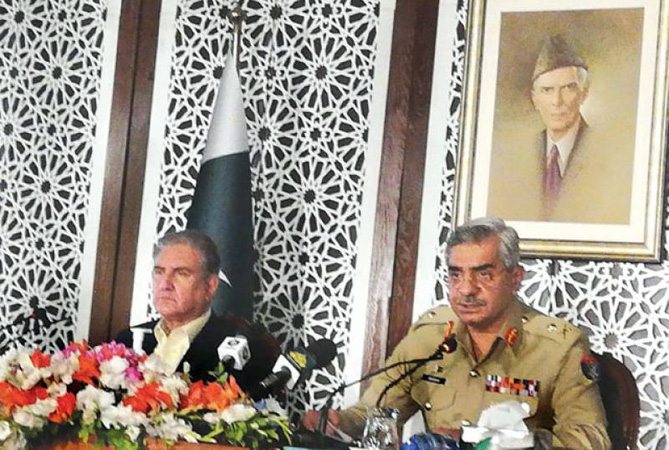 The DG ISPR said the recent upsurge in violence in Pakistan was direct consequence of Indian intensified engagement with the banned outfits, sub-nationalists and dissidents. He said after unification of Tehreek-e-Taliban Pakistan (TTP) with breakaway faction Jamatul Ahrar and Hizbul Ahrar, India was trying to build a consortium along with the proscribed dissident Baloch groups like BRAS.

Showing on screen a translated latter in Dari, the DG ISPR told media that Indian Intelligence officer Col. Rajesh held four meetings with the commanders of the terror outfits to execute terror activities in Karachi, Lahore, Peshawar in November and December this year. He said to establish Pakistan’s linkage with Daesh, India was creating a Daesh-e-Pakistan outfit for what 30 Indian Daesh militants were relocated from India to various camps along Pak-Afghan border.

He said Indian embassies and consulates along Pakistan border had become a hub of terror sponsorship in Pakistan as an Indian ambassador and a consular in Jalalabad held detailed discussion with collaborators to provide financial support to Tehreek-e-Taliban Pakistan (TTP) and dissident Baloch elements.

DG ISPR told media that Indian intelligence service – RAW was financing front men in third countries and through Indian banks, they made two transactions to fan terrorism in Khaber Pakhunkhwa (KP). “Both transactions were made through Indian banks. US $ 28,000 were transferred by Punjab Bank India. Another transaction of US $ 55,851 was made by Manmeet Yadev, an Indian national from an Indian bank in New Delhi and received by Afghanistan International Bank.

He said RAW also held a number of meeting with TTP commanders and Indian embassy paid US $ 0.82 million to TTP commander. To sabotage China Pakistan Economic Corridor (CPEC), India raised a militia of 700 persons to undertake terrorism in Balochistan. A 24-member commission including 10 RAW operatives was created and US $ 60 million were dedicated to this force.

Qureshi said a special cell had been established under Indian prime minister in their intelligence agency to make efforts for undermining, delaying and disrupting CPEC. For this cell, an amount of Rs 80 billion has been allocated. The ISPR DG said Indian embassy had been paying handsome amount to sub-nationalists under the garb of humanitarian assistance projects. The dossier contains four such transactions of US $ 23.35 million to cause unrest in the province. He told media that as per the confessional statement of London-based businessman Sarfaraz Merchant, RAW funded Altaf Hussain through two Indian companies.

Major General Babar Iftikhar said recently, a network was busted having linkage with attack on Pakistan Stock Exchange. The gang was also involved in delivery of suicide jackets, IEDs and explosives to terror groups. Two RAW front men along with four terrorists have been exposed in this case. He said the network was also involved in target killing of ulema, police and notable against handsome amount like Rs10 million each for suicide bombing and vehicle-borne improvised explosive device, Rs one million each for IED and target killing.

According to the dossier, India paid US $ 30 million to establish a camp in the area of Sarhadi Leva of Kandahar to train dissidents of Balochistan and were supplied weapons and ammunition by RAW including four helicopters.

Highlighting the terror attacks sponsored by India, the ISPR chief said the Balochistan Liberation Army and Balochistan Liberation Front launched attack on Pearl Continental Hotel Gwadar in May 2019 for what RAW dedicated US $ 0.5 million. Attack was masterminded by Dr Allah Nazar and Aslam Achhu who also traveled to India on fake documents.

He said 17 audio clips of Dr Allah Nazar discussing future attacks with RAW handlers validated his undeniable connections with RAW. Even the links of attack at Army Public School and Agriculture University also went to India for what facilitator Malik Faridoon was engaged. The attackers of the agriculture university live-streamed the attack to show their handlers and videos were uploaded from Afghan IP addresses.