Norway expands support to UNESCO for girls education in Pakistan

* 13.5m NOK to be spent in Swat and Kohistan districts of KP to improve girls transition from primary to secondary level education 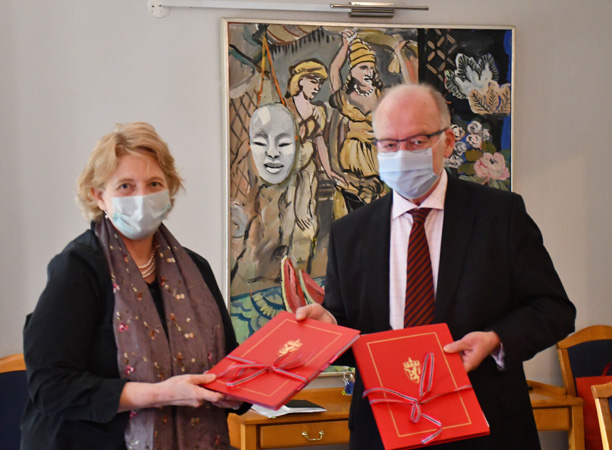 The Norwegian Ministry of Foreign Affairs has extended its support to UNESCO Pakistan with the approved funding of 13.5 million Norwegian Kroner (NOK) for the improvement of the “Girls’ Lower Secondary Education Programme (GLSEP)”.

Currently, Norway supports the GLSEP programming in the districts of Swat and Kohistan in Khyber Pakhtunkhwa Province of Pakistan. Considering the low transition of girls’ from primary to secondary level due to multiple reasons, the Norwegian support has significant importance to facilitate girls’ post-primary education in Pakistan.

To strengthen the existing GLSEP portfolio, the Norwegian Government has agreed to the proposal of programme expansion in three additional districts of Pakistan. H.E. Kjell-Gunnar Eriksen, Norwegian Ambassador to Pakistan and Ms. Patricia McPhillips, UNESCO’s Representative/Director signed the agreement for additional funding of NOK 11 million to extend the scope of GLSEP in Mohamand, a newly merged tribal district of Khyber Pakhtunkhwa, Muzaffargarh in Punjab and Tharparkar in Sindh provinces respectively.

With the additional funding, 112 additional girls’ lower secondary schools including 20 schools from Mohmand district, 30 from Muzaffargarh, and 62 (12 for girls and 50 mixed schools) from Tharpakar will come under the purview of the Norwegian programme. With 46 girls’ schools in Kohistan and Swat, the total coverage of schools under the Norwegian programme will now be 158 girls/mixed lower secondary schools in 05 target districts.

In addition to Kohistan and Swat districts of Khyber Pakhtunkhwa Province, the GLSEP in the three newly added districts will supplement its support in the transition of girls from primary to lower secondary education, through local and institutional interventions targeting multiple stakeholders including education officials, school management committees, community leaders, teachers and parents.

Patricia McPhillips commended the additional contribution of the Norwegian government and shared, “Huge number of girls are dropping out after the completion of primary education in Pakistan, particularly in the remotes areas, which is a serious issue.” She opined, “The Norwegian support is a significant step forward for promotion of girls’ lower secondary education in the most isolated districts of Pakistan.” UNESCO is already operational in the target districts and made substantive progress for access and quality of girls’ primary education. Norwegian support has been playing a vital role for UNESCO to work for the promotion of girls’ lower secondary education in the same geographical territories.

Kjell-Gunnar Eriksen appreciated UNESCO’s consistent support and stated, “The promotion of girls’ education is a priority for Norwegian programme support in Pakistan. The GLSEP is one of the biggest programmes of Norway in Pakistan, which is a testimony to our shared aspirations of winning the common goal of promoting girls’ education in the marginalised areas of the country.” He further added, “I am delighted to add on the existing funding, which will ensure consistency of our efforts for supporting the transition of girls to lower secondary education.”

Norway’s constant and long-standing programme support has made remarkable contributions to increasing both access and quality of education, with a special focus on girls. The Norwegian Government’s persistent commitment to invest in the education sector, with a holistic approach, to improve girls’ access and transition to quality lower secondary education, will further the prospects of girls’ education in Pakistan.