PML-N in ‘reverse gear’ now, wants to have dialogue with army: Sh Rashid 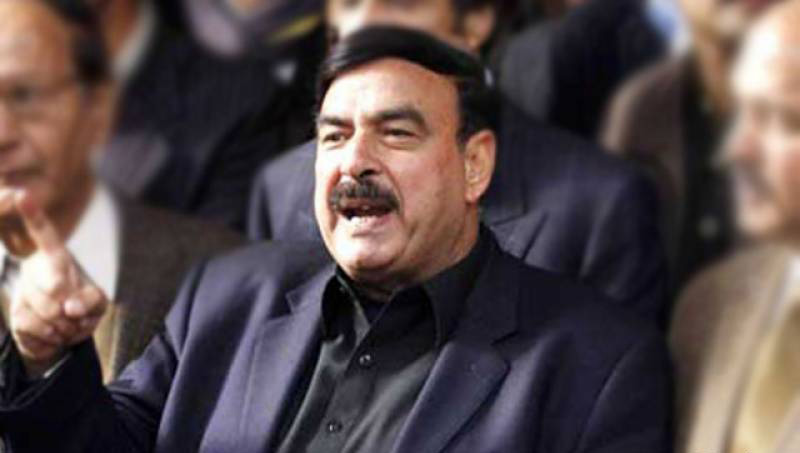 Federal Minister of Railways Sheikh Rashid on Friday said the PML-N is now in ‘reverse gear’ and now want to have a dialogue with the country’s institutions, adding that it is the opposite of the party’s earlier stance.

“Now they are in reverse gear. Now, they are saying that they are willing to negotiate if Prime Minister Imran Khan is removed.”

A day earlier, PML-N Vice President Maryam Nawaz lowered her angry rhetoric and struck a conciliatory tone while hinting that she is not averse to the idea of negotiating with the “establishment” but the removal of the “fake government” would be a prerequisite for such negotiations to take place.

The statement drew angry rebuke for what critics call an invitation to those who she and her father Nawaz Sharif have been criticising for overstepping their constitutional mandate to topple a democratically elected government.

“Maryam changed her statement as she sees her party’s future in Gilgit-Baltistan (G-B) and also because there is now noise from within the PML-N against her and Nawaz’s anti-army rhetoric,” said Rashid.

Nawaz Sharif, the former premier who has been convicted of financial corruption and sentenced to seven years in jail, openly blames the military brass for his ignominious ouster from power.

Referring to recent political moves by the PPP, the federal minister referred to the party’s co-chairperson Asif Zardari as the “6th Fleet of politics” and maintained that the senior PPP leader “plays his cards while holding them close to his chest”.

“He [Zardari] has made space for himself and the PPP to manoeuvre.”

Maryam, who is being hailed a political heir apparent to her father Nawaz Sharif, said she was amenable to negotiations with all stakeholders but sought to deflect the question when asked if she would sit across the table with the government.

Bilawal Bhutto-Zardari, with whose PPP Maryam’s party has found a new political romance, has sought to distance himself from Sharif’s tirade against the military brass. In an interview with the BBC, he said he was expecting Sharif would bring evidence to substantiate his allegations against top generals.

Asked about Bilawal’s statement, Maryam claimed that evidence had popped up on its own much before her father hurled the allegations. “The truth is out in the open in the form of Shaukat Aziz Siddiqui, Judge Arshad Malik and Dawn Leaks,” she said while referring to two judges who accused the military of meddling in judicial affairs.

Nonetheless, Maryam sought to give the impression that her party has no issue with Bilawal’s statement. “The Pakistan People’s Party has its own stance, while the PML-N has its own position which Mian Sahib has made abundantly clear,” she added.

Last month, Maryam’s husband Capt (retd) Safdar was briefly arrested for “violating the sanctity” of Mazar-e-Quaid in Karachi in a manner that triggered outrage from opposition parties. The provincial government in Sindh, where the PPP is in power, alleged that the IG police was kidnapped by military officials and forced to order the arrest of Safdar.

Subsequently, Bilawal requested the military brass to order an inquiry into the incident. The Court of Inquiry could not establish kidnapping/abduction or use of force against the IGP, but removed the Rangers and ISI officers for “acting rather overzealously in a charged environment”, the ISPR said in a statement.

Bilawal was quick to welcome the ISPR statement, but Nawaz rejected it. “The [ISPR] press release didn’t satisfy the public. Instead, it raised more questions,” Maryam said. “‘You are telling the nation that some emotional officers did this in response to public pressure’? “The fake people who filed the case and then the plaintiff ran away. You call the pressure of these three or four persons public pressure!” The PML-N vice-president had also ruled out negotiations with the government saying it would be a “sin” to negotiate with them even if it is for steering out of crises. “In my opinion, Imran Khan and PTI are not a big issue because I do not consider them political people. My party and I are fighting against the mindset that they represent; they represent everything that must be eradicated from Pakistan.”