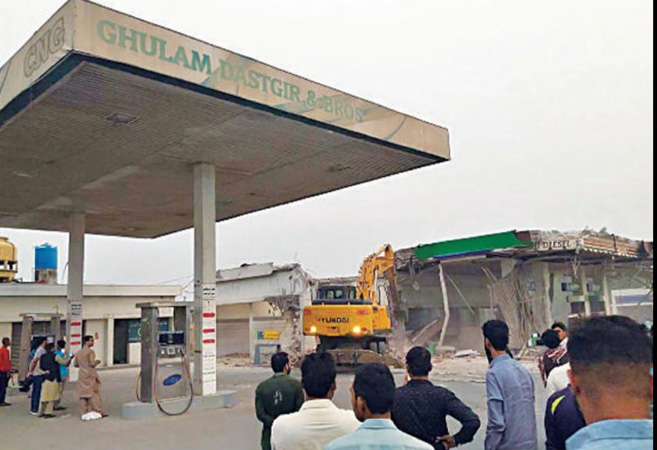 A case has been registered against ex-federal minister Ghula Dastagir Khan and four officials of Punjab Highways Department for conveniently misplacing the lease documents of state land which had been under the illegal occupation of Dastagir and his brothers.

Ghulam Dastagir, father of PML-N senior leader and ex-federal minister for Defense had constructed an illegal petrol pump on the state land. The precious state land located on main GT Road originally belonging to Punjab High Ways Department was retrieved two years ago when the said petrol pump was demolished under the supervision of the then Additional Deputy Commissioner Revenue Gujranwala Kanwal Batool Naqvi with the help of a heavy contingent of police and allied departments.

In order to impose tawan on the benefices and get the amount deposited into public exchequer, it was necessary to look into lease documents as Dastagir & Bros had claimed that they had got the petrol pump constructed on state land after fulfilling the codal and legal formalities of lease agreement with the government. However, in a reference to DG, ACE Punjab by the incumbent DC Gujranwala it has been established that Ghulam Dastagir in collusion with Mirza Shahid Nadeem SDO Highways Department, Gujranwala and three other officials got the record misplaced with mala-fide intentions and thus caused a huge loss to public exchequer.

ACE Punjab upon the recommendations of deputy commissioner’s office has registered a case against the owners of the petrol pump and four other government officers/officials for engineering the misplacement of record.