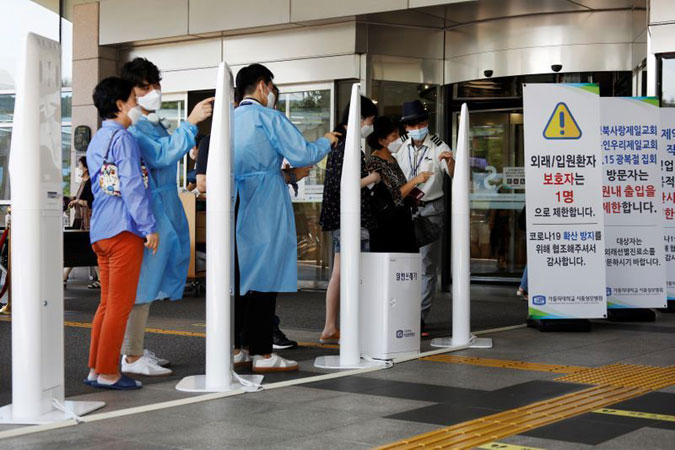 South Korea is in final talks with global drugmakers including Pfizer Inc over potential coronavirus vaccines as it seeks to secure supplies to cover 60% of its population this year, health authorities said on Thursday.

The government has allotted 172 billion won ($154 million) to purchase an initial 60 million doses to fend off persistent COVID-19 outbreaks that have pummelled Asia’s fourth-largest economy and upended daily life for its 52 million people.

This week, Pfizer said its experimental COVID-19 vaccine was more than 90% effective amid a hastened global race to contain the pandemic which has killed more than 1 million people since it emerged in China late last year.

Health authorities said progress has been made in their negotiations with several drugmakers conducting Phase 3 clinical trials for their vaccines, including Pfizer, AstraZeneca <AZN.L> and Novavax Inc <NVAX.O>.

“We will procure as much as possible with the initial goal of securing supplies for 60% of the population,” said Kwon Jun-wook, deputy director of the Korea Disease Control and Prevention Agency (KDCA).

“So far, there has been meaningful headway and we were at a final stage of the talks,” Kwon said, declining to elaborate, citing ongoing negotiations.

Kwon said the government has already secured some 20 million doses, enough for 10 million people, via the COVAX facility, an international COVID-19 vaccine allocation platform co-led by the World Health Organization.

The remaining 40 million doses will be bought from private companies.

The government said it plans to hold its first meeting late on Thursday with a newly formed advisory committee of experts to discuss its vaccine procurement plans including safety standards and distribution procedures.

South Korea is one of the coronavirus mitigation success stories, with an aggressive testing and tracing strategy, but it continues to battle small clusters of outbreaks.

The KDCA reported 143 new coronavirus cases as of Wednesday, taking total infections to 27,942 with 487 deaths.

“It will take quite some time for any vaccine to obtain final approval before use,” Kwon said. “But this winter will be the last one for us to spend by distancing and wearing masks.”