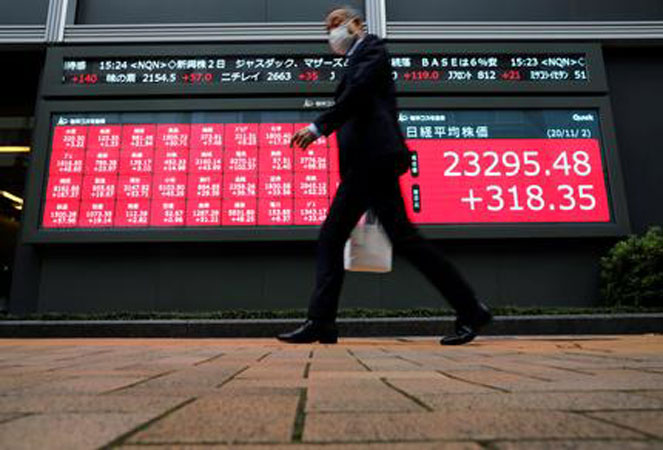 Stocks gained and bonds dropped on Wednesday as prospects of an effective COVID-19 vaccine outweighed nagging worries over surging infections, fueling a rotation towards cut-price losers from the coronavirus pandemic such as travel stocks. The broad Euro STOXX 600 climbed 0.9%, gaining steam through the morning and building on a 5% rally this week to hit its highest since early March. Beaten-down equities were in demand, with travel-related stocks gaining 1.2%. Tech companies, which like their U.S. counterparts have surged since March’s coronavirus crash as lockdowns have pushed people to work and shop online, turned positive after opening in the red. Wall Street futures gauges also climbed, with S&amp;P 500 futures up 0.8%. Bonds also adjusted to the prospect of a post-pandemic world, with the yield on German Bunds, a benchmark for eurozone sovereign debt, rising to their highest for two months at -0.456%. The yield on benchmark 10-year U.S. Treasuries posted on Tuesday its highest close since March, though U.S. bond markets are shut on Wednesday. Bond yields rise when prices fall. “The market is not wrong — we know who benefited during COVID, and it was almost inevitable that if COVID comes to an end, you would have a reversal on that,” said Luca Paolini, chief strategist at Pictet Asset Management. The MSCI world equity index, which tracks shares in almost 50 countries, gained 0.2% to move close to its record high touched on Monday. Earlier, Asia-Pacific shares outside Japan nudged up 0.2%, even as Chinese tech stocks fell sharply over concerns about tighter regulation.

Investors have pivoted to riskier plays in equities, foreign exchange and bonds after Pfizer Inc said on Monday its COVID-19 vaccine candidate, developed with BioNTech, showed a 90% success rate in preventing infection during trials. Nearly $2 trillion changed hands on Monday alone, one of the heaviest trading days since the height of the pandemic crisis. Tech stocks, among the major winners in the pandemic, have lost out, as have safe-haven currencies like the Japanese yen. “You have seen a big rotation which highlighted how skewed positioning was, as people sheltered in the work-from-home plays,” said Richard Saldanha, a portfolio manager at Aviva Investors. “For names geared towards so-called normalization of activity, (the rally) could continue to play out in coming days.” Goldman Sachs lifted its 2020 S&amp;P 500 target to 3,700 points as the vaccine news added momentum to a stock market rally sparked by Joe Biden’s U.S. election win. It sees the S&amp;P 500 hitting 4,300 at year-end 2021, a fifth higher than Tuesday’s closing levels. Benchmark Brent oil rose to a more than two-month high above $45 a barrel, fueled by vaccine prospects and an industry report showing U.S. crude inventories fell more than expected. Brent futures were up $1.41, or 3.2%, at $45.02 — the first time they have cleared the $45 threshold since early September. A rotation of sorts is also underway in fixed income markets, as bonds in Japan, South Korea, Singapore and Thailand fell while higher-yielding, a riskier debt of countries like Indonesia held gains. In currency markets, Turkey’s lira gained 3% to pass 7.9 to the dollar as President Tayyip Erdogan said his government was forming a new growth strategy, financed in part by international investment. Sterling hit its highest level in more than two months versus the euro as traders bet a vaccine would boost the UK economy. It was last flat at $1.3265. The euro fell 0.3% to $1.1786 ahead of a speech from European Central Bank President Christine Lagarde at 1300 GMT. The dollar steadied against a basket of six major currencies and by late morning was up 0.2% at 92.927.