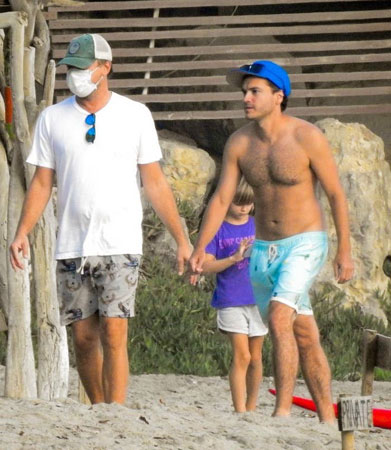 Who says you can’t have a beach day in the fall? On Friday, Nov. 6, Leonardo DiCaprio, 45, was spotted at the beach in Malibu, Calif. alongside friend and The Girl Next Door star Emile Hirsch, 35. Both wearing swim trunks—Leonardo in a set of patterned gray and Emile in baby blue—the duo even hit the surely chilly waters.

It seemed like a bros day out as the friends were joined by others, including the Titanic star’s dad, George DiCaprio. Noticeably though, the day was missing Leo’s longtime girlfriend Camila Morrone, 23.

The couple made their first public appearance in Aspen, Colo. in Jan. 2018 and were in full-on PDA mode at Coachella a few months later, where they were spotted snuggling close during Beyonce’s iconic Homecoming performance.

Though Leonardo has a slight reputation for hard partying and, well, let’s just say it, as a bit of a playboy, he and the model have been going strong, despite their noted 25-year age gap.

In fact, during an interview with the Los Angeles Times, the aspiring actress addressed the age difference, stating, “There’s so many relationships in Hollywood—and in the history of the world—where people have large age gaps. I just think anyone should be able to date who they want to date.”

So far, the two have kept their relationship pretty private, yet still continue to gain attention, so Camila says she understands the public interest in their relationship. “I probably would be curious about it too” said the actress, who starred in 2019’s Mickey and the Bear, but she’s also confident that she and her leading man will eventually “slip away and be less of a conversation.”