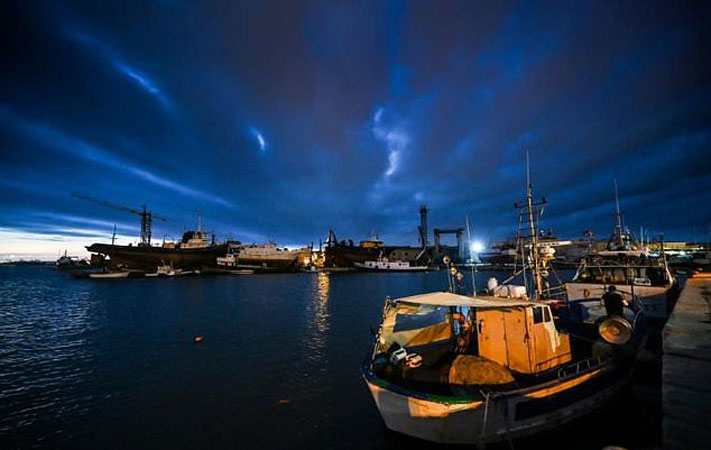 Domenico Asaro recalls the day in 1996 when Libyan forces began firing on his Italian fishing boat “Osiride” (Osiris), triggering a four-hour chase during which a bullet grazed his skull.

The deep-sea trawler, which had been fishing for prized giant red shrimp in international waters 50 nautical miles (93 kilometres) off Misrata, was seized and Asaro and his eight-man crew spent the next six months in a Libyan jail.

Now aged 64, “Mimmo,” as he is known, sees his experience replayed as 18 fishermen from his southern Sicilian city enter their third month of captivity in Libya for allegedly fishing in its territorial waters.

It’s a dangerous, yet familiar, episode for the fishermen of Mazara del Vallo, who for generations have relied on these Mediterranean waters for their livelihoods but see their futures increasingly threatened.

As fish stocks have dwindled and trawler capabilities improved, their boats have sailed further from port in recent decades in search of the elusive, lucrative catch — but into waters over which Libya has claimed sovereignty.

The tensions over fishing rights between Sicily and its North African neighbours, especially Libya and Tunisia, have escalated into what has been dubbed the “fishing wars”.

Sicily’s fishermen say the Mediterranean’s international waters are theirs to fish, as long as they stay 12 nautical miles offshore — the zone considered a country’s territorial waters by the United Nations.

Libya disagrees and lays claims to a wider expanse of sea.

The dispute intensified in 2005 when Libya’s then-dictator Moamer Kadhafi proclaimed its protected fishing zone extended 74 nautical miles from the coast, in defiance of international standards.

According to the Sicilian regional government, citing data from a Mazara-based research group, the battle over fishing rights in recent decades has resulted in 300 Sicilian fishermen being taken prisoner, 150 boats being confiscated and over 100 million euros ($117 million) in damages.

Libya’s descent into civil war since the overthrow and killing of Kadhafi in 2011 has exacerbated hostilities and Rome recommends that fishermen avoid the contested zone.

Italy’s navy used to patrol the area to ensure the crews’ safety — but no longer, say fishermen here, who are incensed at reports that some of the attacks have come from patrol boats given to Libya by Italy to stop migrants from reaching European shores.

Asaro’s harrowing experience 24 years ago — which ended when he was released by Libya for good behaviour — was not his last.

In 2010, he escaped gunfire from a military boat 30 nautical miles northeast of the Libyan port of Khoms, but not before 96 holes ripped into the metal hull.

Two years later, his boat and its catch were seized north of Benghazi, and Asaro spent a week in prison.

Despite it all, he still fishes.

“For giant red shrimp, yes. But never again near Libya.”

Seized in the night

The Mazara crews of the “Antartide” and “Medinea” had set out in late August on one of their seven yearly trips.

Staying out 30 to 40 days until just before the fuel runs out, the boats venture to fishing spots discovered decades ago to pull in around 35,000 kilogrammes (77,000 pounds) of shrimp per boat each year.

Every trip requires about 50,000 euros upfront, from fuel to new nets and salaries.

But the haul — the succulent, bright-red Aristaeomorpha Foliacea swimming 600 metres (1,970 feet) below the surface — are worth it, fetching nearly 50 euros per kilo wholesale.

As evening fell on September 1, some 40 nautical miles off Benghazi, the nine Italian trawlers that had set off together a week earlier were suddenly approached by a Libyan coastguard boat, shining its spotlights, as rigid inflatable boats began to circle.

Seven fishing boats escaped but two others were seized, along with 18 fishermen.

“We were all there, we could see everything,” Giuseppe Giacalone, 56, told AFP.

He witnessed his son Giacomo being taken, along with seven other Italians, six Tunisians, two Indonesians and two Senegalese.

“I didn’t know what to do,” Giacalone said. “I would have gone in my son’s place if I could have.”

They were accused of fishing inside Libya’s protected fishing area and entering a military zone by forces of military strongman Khalifa Haftar, who controls Benghazi and is waging war against the UN-recognised government of Prime Minister Fayez al-Sarraj in the west.

Italian media have reported that Haftar wants to trade the jailed fishermen for four Libyans arrested in 2015 in Italy and sentenced to 30 years in prison for human trafficking.

Families fear the fishermen are caught up in a geopolitical power struggle, with Haftar thumbing his nose at Rome, whose relevance in the region has waned since Kadhafi’s overthrow, complicating Italy’s efforts to protect its extensive energy assets in its former colony and curb the flow of migrants to its shores.

“Who pays? The fishermen of Mazara,” said Giacalone.

Di Maio, who met the families in September along with Prime Minister Giuseppe Conte, has called the fishermen’s return an “absolute priority” for the government.

He told the Senate that he had appealed to the foreign ministers of Russia and the United Arab Emirates, who support Haftar, for assistance.

Since the arrests, family members have occupied Mazara’s city hall, hanging giant “Free our Fishermen” banners inside the council chambers.

Others have camped day and night outside the Italian parliament in Rome.

Despite Pope Francis saying he was keeping the Mazara fishermen in his prayers, the families say they feel abandoned and are sceptical about Rome’s claims the men are in good condition.

Di Maio has said they are in an “independent structure”, not a prison, and are being treated “in a correct way.”

But in the only phone call the families have received, on September 16, one fisherman said Libyan officials had also accused them of drug trafficking.

“The wives of the fishermen are asking for international help,” said one of them, Paola Bigione.

“We don’t have faith anymore in the Italian government.”