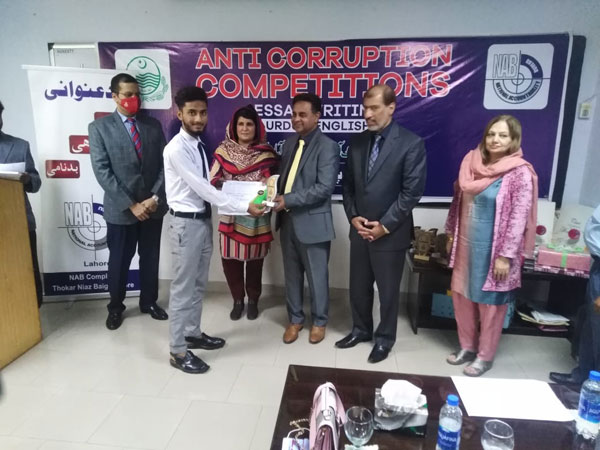 On the concluding awareness and prevention activity of National Accountability Bureau (NAB), Lahore, the regional bureau organized a final declamation and essay writing competition on the topic of “Shaffaf Pakistan” held at Punjab College, Faisalabad.

In the final declamation and essay writing competition, the students were given the opportunity to express their views over the topic of “Shaffaf Pakistan”. The College level students participated in the contests with full zeal and fervor and also highlighted the importance of Accountability Institutions to establish a corruption free culture. Since last month, NAB Lahore has been continuously organizing Declamation, Essay Writing and other miscellaneous Competitions among the students of School, College and University level from all 26 Districts of province Punjab by keeping in view the objective to create impulsive awareness about the menace of Corruption in new generation. While addressing to the students, Director NAB Lahore maintained that NAB is the most prestigious organization working to culminate corruption from Country which has been admired by numerous International Forums. NAB has been working diligently to enforce Chairman NAB Justice Javed Iqbal’s directions to recover the looted money from corrupt elements on priority and by continuing

with directions of Chairman NAB, NAB Lahore’s performance, during last three years, is the demonstration of his vision as the regional Bureau recovered Rs 15817 Million which exceeds 280% than past years and the In-direct Recovery of Rs53528 Million which precedes upto 890% comparing to past years, likewise, NAB Lahore has filed References in Accountability Courts involving an amount of Rs73237 Million that shows 425% increase. At the end, Director NAB Lahore handed over the winning students with ‘Merit Certificates’, moreover, on International Anti-Corruption Day event (9th December) the winning students would also be presented with Cash Prizes and Shields. All these competitions would remain continue till commencement of International Anti-Corruption Day on 9th December, 2020.