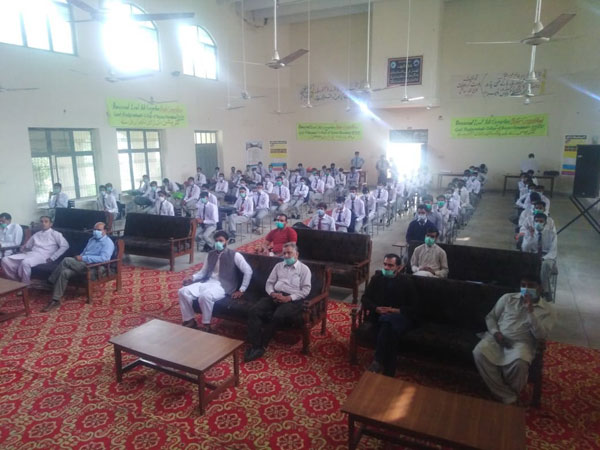 As part of ongoing awareness and prevention activities of A&P Wing of National Accountability Bureau (NAB), Lahore, the regional bureau organized declamation and painting contests at Government Post Graduate College and Government Degree College, Faisalabad in which students from different colleges up to the divisional level participated.

Both the contests were chaired by Director Colleges Faisalabad Division Dr. Kalsoom Akhter and Director Syed Husnain from NAB Lahore.

The students were given the opportunity to express their thoughts over the topic “Role of Students in Elimination of Corruption”. The College level students participated in the contests with full dedication and passion and also highlighted the importance of Accountability Institutions, in the way to eradicate the menace of corruption from Country.

While addressing to the students, Director NAB Lahore said that NAB is the most prestigious organization working to culminate corruption from country which has been admired by numerous International Forums. NAB has been working diligently to enforce Chairman NAB Justice Javed Iqbal’s vision of “Corruption Free Pakistan”. NAB Lahore’s last three years performance is the demonstration of this vision when the regional Bureau held 656 accused over corruption allegations and the conviction rate remained 78% of the Regional Bureau. During last three years, NAB Lahore facilitated more than 60,000 affectees by redressing their losses.

NAB Lahore’s A&P Wing organizes different kinds of competitions like Speech, Poetry, Essay Writing, Painting and Posters Competitions amongst students of School, College and University level with the intention to pamper awareness against corruption and its ill-effects over society.

The chief guests awarded the winning students with ‘Merit Certificates’, whereas, on International Anti-Corruption Day event (9th December) the winning students would also be presented with Cash Prizes and Shields. All these competitions would remain continue till commencement of International Anti-Corruption Day on 9th December, 2020.