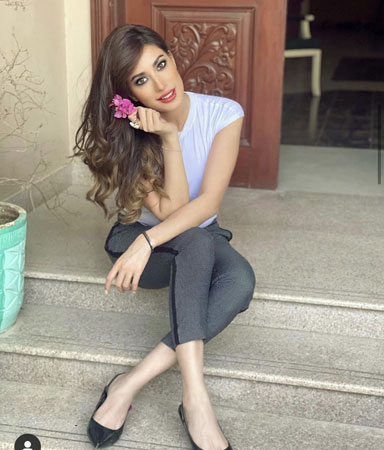 Top actress and recipient of Sitara-e-Imtiaz Mehwish Hayat said that she was a “cold mamacita”. Taking to Twitter, Mehwish who is known for her leading role in “Punjab Nahi Jaungi” stunned her fans and followers by sharing her new picture.

The actress was sitting somewhere at stairs, with flowers in hands, pose and eyes as if she was waiting for “something”. She called herself “Cold Mamacita” and used sign of exclamation and “electricity”, telling her fans that she was “extremely beautiful and atractive”.

A day earlier, she had tweeted about US elections’ results and mentioned Kamala Harris after she was elected as the first vice-President of the US.

“We cannot overlook the significance of #KamalaHarris being the first woman to be elected to the office of Vice President! You don’t need to be American to appreciate what this means for women & especially for women of colour everywhere… Goosebumps about what the future holds! Raising hands,” the actress had said.