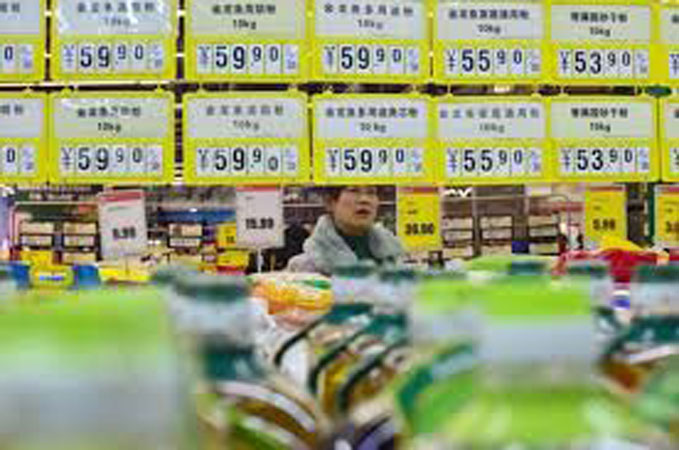 China’s factory-gate prices fell at a sharper-than-expected pace in October, weighed by soft demand for fuel even as the trade and manufacturing sectors staged impressive recoveries from their COVID-19 slump.

Consumer inflation was also soft, easing to an 11-year low as pork prices snapped a year-and-a-half of steep increases that was fuelled by critical shortages of the popular meat.

The producer price index (PPI) fell 2.1% from a year earlier, the National Bureau of Statistics said in a statement on Tuesday, the same pace as in September and slightly more than a 2.0% decline tipped by the median forecast from a Reuters survey of analysts.

“We expect both CPI and PPI to be subdued in Q4,” said Zhaopeng Xing, markets economist at ANZ. “However, inflation will likely rebound after Q1 2021, thanks to the growing demand post the pandemic.”

Chinese shares fell following the data, defying a global rally in stocks that was driven by news about the development of a coronavirus vaccine.

On a monthly basis, the PPI was unchanged, slowing from a 0.1% increase the previous month.

Oil and gas extraction prices fell 4.9% month-on-month in October while fuel processing costs declined 1.6%, Dong Lijuan, a senior statistician with the NBS, said in a statement.

The weak inflation contrasts with brisk growth in exports and manufacturing activity, seen as signs of a sustained recovery in China’s industrial sector. China’s economic growth accelerated to 4.9% from a year earlier during the third quarter as activity extended its recovery from a record slump at the start of the year.

Analysts expect the economy to post a small gain for all of 2020 and then expand at a more robust pace in 2021, partly on hopes that COVID-19 vaccines will become available globally.

China’s consumer price index rose 0.5% from a year earlier, the slowest since October 2009, separate data showed on Tuesday, missing the 0.8% rise tipped by the Reuters poll and a 1.7% rise in September.

Pork prices fell 2.8% year-on-year in October, marking the first decline after 19 months of sharp increases due to supply constraints from the African swine fever. It had risen 25.5% in September.

“If month-on-month price increases remain muted in the coming months, there is a chance that CPI may fall into deflationary territory,” said Jingyang Chen, Greater China economist at HSBC.

“While a gradual recovery in household consumption and lower base may support an upward trajectory in CPI inflation next year, we think the possibility of CPI deflation in the coming months will likely prevent the PBOC from tightening its policy stance by year-end.”