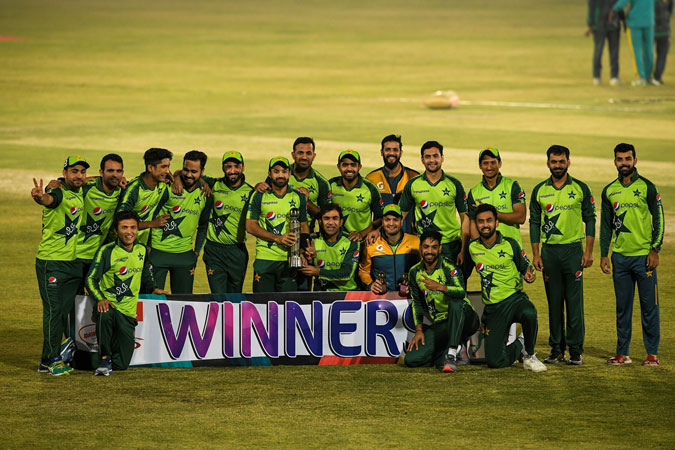 RAWALPINDI: Spinner Usman Qadir, son of cricket legend Abdul Qadir, claimed four wickets for just 13 runs as Pakistan scored an eight wickets victory in the third and final Twenty20 international to clean sweep visiting Zimbabwe at the Rawalpindi Cricket Stadium here on Tuesday. Pakistan won the first match by six wickets and second by eight scalps at the same venue. Zimbabwe lost the preceding one-day international series 2-1. Usman stunted Zimbabwe hopes of a challenging total at 129-9. Chasing victory target of 130, Pakistan reached home for the loss of two wickets in only 15.2 overs against a listless Zimbabwe bowling attack. After losing Fakhar Zaman (21) and Haider Ali (27), Abdullah Shafiq, promoted on debut as an opener ahead of captain Babar Azam, went 41 not out, and Khushdil Shah, playing in his fourth T20, smashed 30 not out off 15 balls with three fours and three sixes to make sure the hosts’ victory. The match was also Zimbabwe batsman Elton Chigumburas farewell international match and the 34-year-old received a guard of honour from the Pakistan players when he came out to bat for the last time but that was the only goodwill offered by the home side.

Earlier, leg-spinner Usman bowled four mesmerising overs after Zimbabwe won the toss and opted to bat first. Usman started the slide with the wicket of Zimbabwe skipper Chamu Chibhabha (31), before dismissing Wesley Madhevere (nine), Milton Shumba (11) and Chigumbura (two) to give Pakistan a good chance of a 3-0 sweep. Chibhabha hit three boundaries and a six in his 28-ball knock, the highest of the innings. Donald Tiripano (28) and Wellington Masakadza (11) shared the best stand of 33 runs off 19 balls which enabled Zimbabwe to cross the 100-run mark. Both fell in the penultimate over and Zimbabwe was restricted to its lowest total in the series. Left-arm spinner Imad Wasim finished with 2-27. “Not quite the finish to the series we had wanted,” skipper Chibhabha said, “But its good to see a few youngsters coming up,” he added.