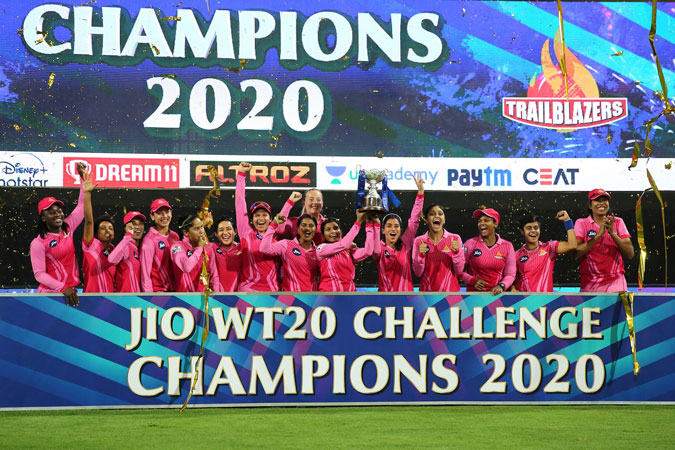 SHARJAH: Indian opener Smriti Mandhana struck a half-century and Bangladesh’s Salma Khatun bagged three wickets as Trailblazers claimed the Women’s T20 Challenge title with a 16-run win over twice defending champions Supernovas in the final on Monday. Chasing a target of 119, Supernovas got off to a wobbly start in Sharjah, losing three quick wickets including Indian youngster Jemimah Rodrigues. Supernovas skipper Harmanpreet Kaur, struggling with a niggle during the chase, tried to put up a fight with the help of Sri Lanka’s Shashikala Siriwardene but right-arm off-spinner Khatun dismissed both players.

Khatun grabbed another wicket to finish with figures of 3-18, while fellow off-spinner Deepti Sharma picked two as Supernovas could only manage 102-7. “We have some quality spinners… 135 would have been amazing, but 118 was also a good total on this wicket,” said Trailblazers captain Mandhana. West Indies batswoman Deandra Dottin and Mandhana earlier gave Trailblazers a solid start with a 71-run partnership in the first innings, but the middle order crumbled after the Indian was dismissed for 68 in the 15th over. The three-team women’s tournament was held in the United Arab Emirates alongside the men’s Indian Premier League, which will host its final between Mumbai Indians and Delhi Capitals on Tuesday. “It was amazing to get to the nets with the overseas players and our youngsters,” Mandhana said. “It was good to get some knowledge and exchange notes. For the youngsters, getting to hear from a Dottin is a headstart before you even make it to the national team.”