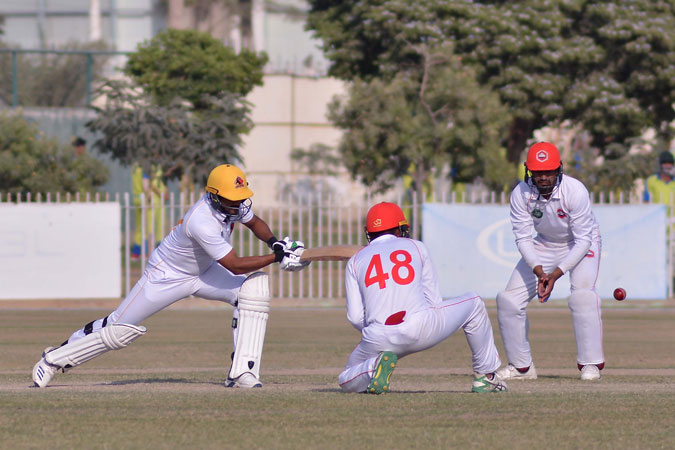 KARACHI: Northern captain Nauman Ali bowled his side to a dominating 128-run win over Sindh on the final day of round three of their first-class Quaid-e-Azam Trophy match at the UBL Sports Complex here on Monday. The left-arm orthodox took five wickets for 95 runs to record his second five-wicket haul of the match and 15th of his first-class career. He finished the match with 10 for 157. Nauman, who had the most wickets in the 2019-20 edition of the first-class Quaid-e-Azam Trophy, now has the most scalps in the ongoing tournament with 25 wickets at 16.72 runs per wicket.

Mohammad Nawaz, also a left-arm orthodox, took two wickets for 48 runs. Saud Shakeel’s gallant 174 went in vain after Sindh resumed their innings on 77 for three. The 25-year-old had begun the day at 46 not out before stroking his way to his ninth century at this level. Saud faced 296 balls in total of which 27 were hit for boundaries. Fawad Alam, with 36, was the only other notable run-getter in the innings.

This was Northern’s second consecutive win in the tournament, following an innings and 96-run drubbing against Southern Punjab in the opening round of the tournament. Northern pocketed 24 points – 16 for outright win, three for batting and five for bowling – from the win. With one batting point and three bowling points, Sindh added four points to their tally. Khyber Pakhtunkhwa’s points tally received a massive boost as they rolled over Southern Punjab by 75 runs at the National Bank Sports Complex. This is Khyber Pakhtunkhwa’s first win of the tournament. Southern Punjab resumed the day at 13 for no loss in their pursuit of 263. Spinners Khalid Usman and Sajid Khan shared seven wickets as Southern Punjab, who had won both of their previous matches, were bowled out for 187.

Khalid’s four wickets cost 50 runs, while Sajid followed up his career’s fifth five-wicket haul (six for 71 in the first innings) with three for 63. Pacer Usman Shinwari took two wickets for 30 runs. With a 130-ball 56, wicketkeeper-batsman Umar Siddiq was the top-run getter for his team in the second innings, while opener Mukhtar Ahmed, who was not out on eight overnight, scored 38. Khyber Pakhtunkhwa gained 22 points from the match (16 for outright win, two for batting and four for bowling). Table-toppers Southern Punjab could add only five points (two for batting and three for bowling).

Central Punjab captain Azhar Ali helped his side secure a draw against Balochistan at the National Stadium. Set a target of 269, Central Punjab had lost both their openers – Ahmed Shehzad (15) and Abid Ali (10) – by the end of the first session with the scorecard reading 31 after Balochistan added 43 runs to their overnight score of 170 for seven to post 213 all out. Azhar anchored Central Punjab’s innings with an undefeated 184-ball 95, which included 11 fours. Over the course of his stay at the crease, Azhar crafted solid partnerships of 59 and 82 with Usman Salahuddin (27) and Mohammad Saad (47) for the third and fifth wickets. Central Punjab were 225 for seven in 66 overs when the match was called off due to bad light. Pacers Khurram Shahzad and Amad Butt, who had recorded his career’s best figures of six for 57 in the first innings, took two wickets each.

3: Match drawn between Balochistan and Central Punjab at National Stadium: