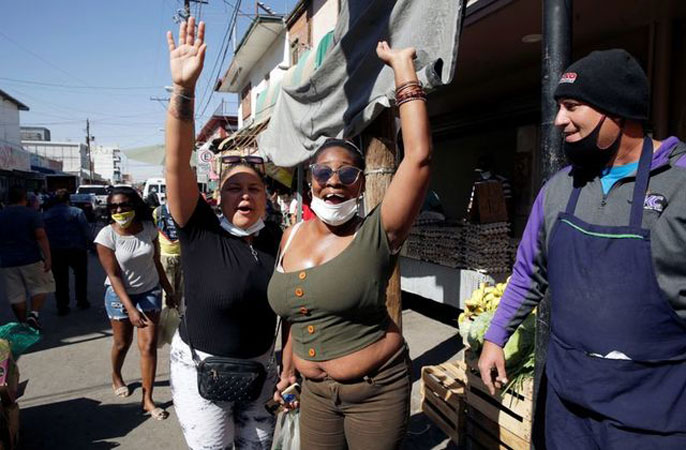 The news and celebrations spread fast among communities of asylum seekers stranded from Tijuana to Matamoros more than 1,500 miles along the US-Mexican border on Saturday – Joe Biden had won the race for the White House.

The Democratic former vice president was declared the victor by major television networks on Saturday, even as President Donald Trump filed lawsuits, alleging fraud without providing evidence, and said the race was “far from over.”

Cheers and chanting broke out in a Matamoros refugee camp and among Cubans in gritty Ciudad Juarez, a reflection of awakening hope that the next president will unwind a virtual ban on asylum in the United States.

“No more Trump!” the Cubans yelled in Ciudad Juarez, just across from El Paso, Texas.

Trump’s “Remain in Mexico” policy has required more than 66,000 migrants to wait in Mexico as their claims snake through US courts.

All week long, the asylum seekers have held their breath amid an election that many said would determine their future.

Some implored relatives in the United States to turn out to vote against Trump. Dozens in the sprawling Matamoros camp spent election night singing hymns, praying for a Biden victory, or huddled around the camp’s charging station glued to their telephones.

On Friday, a row of shiny metal balloons spelling out “Bye Trump” was displayed in the camp. On Saturday, the news many had been waiting for finally arrived.

“We’re all going to celebrate today!” said Dairon Elisondo, a Cuban who works as a doctor in the Matamoros camp, a sprawling makeshift encampment that has become a symbol of the Trump administration’s crackdown on immigration.

“Everyone is so happy,” he added.

But, for many, the celebration came with a question: Would Biden really follow through with the pro-migrant promises he’s made on the campaign trail?

“He (Biden) has said a lot of pretty words about us migrants, so I think he should have to complete everything that he’s promised us,” said Rubinaldo Cantillo Martínez, a Cuban asylum seeker.