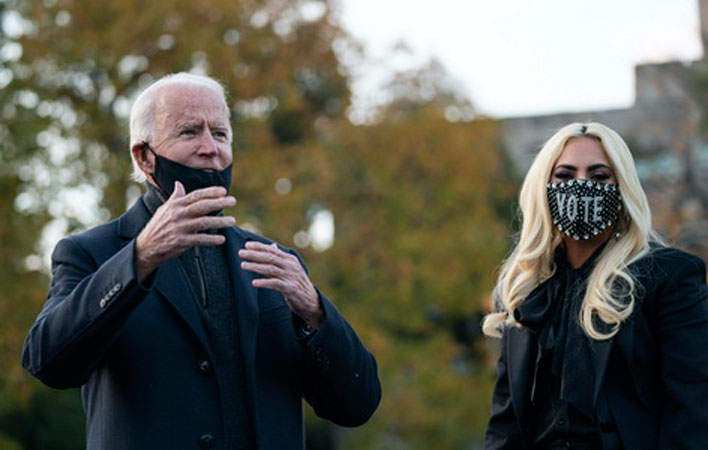 Lady Gaga has a million reasons to celebrate the 2020 U.S. Presidential Election.

On Saturday, Nov. 7, NBC News projected Joe Biden as the 46th President of the United States with Kamala Harris making history as the first Black and South Asian American to hold the Vice President title.

Following the news, Lady Gaga took to Instagram and shared a series of moving videos with her millions of followers.

“I hope you’re all celebrating,” she began. “I hope all the women in this country know that there is a real reckoning and a real change. I hope the people who have been oppressed by power… I hope that you know your voices are heard.”

“I’m just honestly kind of speechless,” she continued, holding back the tears. “This is a very special day. It’s a day where a lot of people… have felt like we were living in a state of terror and aggression all the time and it’s over. You can feel warm now.”

The “Rain On Me” singer said she felt Biden and Harris’ victories were “so good for the world.” She also asked her fans to lead with love and positivity.

“I feel like the world just got a big hug from God,” she expressed. “Go home and hug your families and hug yourself. May we all stitch ourselves back together after all this. Be safe and be peaceful. There’s no need to gloat in anybody’s face that Joe won.”

She added, “There’s no need to be unkind. This is just a time for healing, this is a time for rest and a time for love. And the people have spoken.”

Before signing off, the Oscar winner took a moment to pay tribute to politician and activist, Stacey Abrams. According to The New York Times, Stacey helped build a network of organizations that fought voter suppression and inspired nearly 800,000 new voter registrations in the state of Georgia.

“Thank you so much to everybody that voted and thank you so much, Stacey Abrams,” Lady Gaga said. “All the work that you did in Georgia, you’re such an inspiration to so many people. Send her and all of her team all the love they deserve, and the respect. All that realness, all that authenticity, it shines so bright through that state.”

The Haus Labs founder closed, “Be filled with peace in your heart.”

She later dedicated an Instagram post to Biden and Harris, writing, “@joebiden @KamalaHarris and the American people, you just gave the world one of the greatest acts of kindness and bravery humanity has ever seen. Nothing but love for our new Commander in Chief and the 1ST female VP elected to the White House. Also, way to go PA.”

Lady Gaga isn’t the only star to share her thoughts on the 2020 U.S. Presidential Election.