* Donald Trump's presidency, which convulsed American politics, shocked the world and left United States more divided than at any time in decades, 'comes to an end' 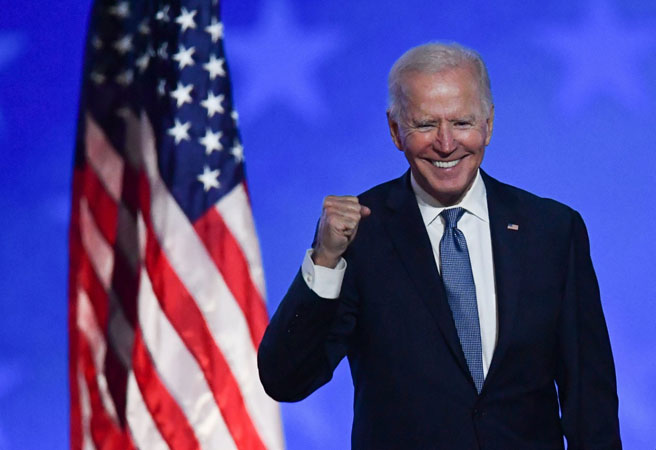 Democrat Joe Biden has won the White House, US media said on Saturday, defeating Donald Trump and ending a presidency that convulsed American politics, shocked the world and left the United States more divided than at any time in decades.

The confirmation of victory of Biden, who at 78 will be the oldest American president, brings to a climax three days of post-election anxiety and uncertainty that followed one of the most bruising US presidential races in modern times.

The Associated Press declared Biden, whose vice president will be Kamala Harris – the first female to hold the post in America’s history, the winner on Saturday evening after he secured more than the crucial 270 electoral votes he needed to win the White House. CNN, NBC News and CBS News also called the race in his favour, after projecting he had won the decisive state of Pennsylvania.

Biden declared victory in a tweet, saying: “America, I’m honored that you have chosen me to lead our great country. “The work ahead of us will be hard, but I promise you this: I will be a President for all Americans – whether you voted for me or not. I will keep the faith that you have placed in me.”

As Americans remained glued to TV screens and their phones and the world awaited an announcement with bated breath after polls closed on Tuesday, Biden ended up securing victories in the “blue wall” battlegrounds of Wisconsin and Michigan and narrowing President Donald Trump’s path to reelection.

But with just a handful of states still up for grabs, Trump tried to press his case in court in some key swing states. In spite of the aggressive Republican move, the flurry of court action did not seem obviously destined to impact the election’s outcome. Two days after Election Day, neither candidate had amassed the votes needed to win the White House. But Biden’s victories in the Great Lakes states left him at 264, meaning he was one battleground state away – any would do – from becoming president-elect.

Trump, with 214 electoral votes, faced a much higher hurdle. To reach 270, he needed to claim all four remaining battlegrounds: Pennsylvania, North Carolina, Georgia and Nevada.

With millions of votes yet to be tabulated, Biden already had received more than 71 million, the most in history. At an afternoon news conference on Wednesday, the former vice president said he expected to win the presidency but stopped short of outright declaring victory. “I will govern as an American president,” Biden said. “There will be no red states and blue states when we win. Just the United States of America.”

With decades of political experience under his belt, this was Joe Biden’s third run at the White House.

Born in Scranton, Pennsylvania, the 77-year-old began his political career in 1972, when he was first elected to the US Senate from Delaware state. The Democrat has considerable experience in foreign policy and was the chair of the Senate Foreign Relations Committee twice in his career. He has also served as the chairperson of the Committee on Judiciary.

Though long and distinguished, Biden’s career is certainly not stain-free. He has faced criticism for sponsoring the Violent Crime Control and Law Enforcement Act of 1994, which critics say led to the mass incarceration of African Americans.

The former vice president is also no stranger to personal loss and tragedy. In 1972, he lost his wife and baby daughter in a car accident soon after he won his first seat in Senate. His sons Beau and Hunter survived and Biden swore his oath while in the hospital with his sons.

In 2015, when Biden was vice president, his son Beau died from brain cancer. He was 46 and had started off a career in politics.

Biden first ran for president in 1988 but withdrew from the race after it was revealed that he had plagiarised a speech from Neil Kinnock, then leader of the British Labour Party.

He tried his luck once again in 2008 but was unsuccessful this time too as the Democratic Party nominated Barack Obama. Biden was later nominated for the position of vice president and served alongside Obama for the next eight years. Biden, who mocks Trump’s ‘America First’ slogan as ‘America Alone’, aims to restore the country’s position as a global leader.