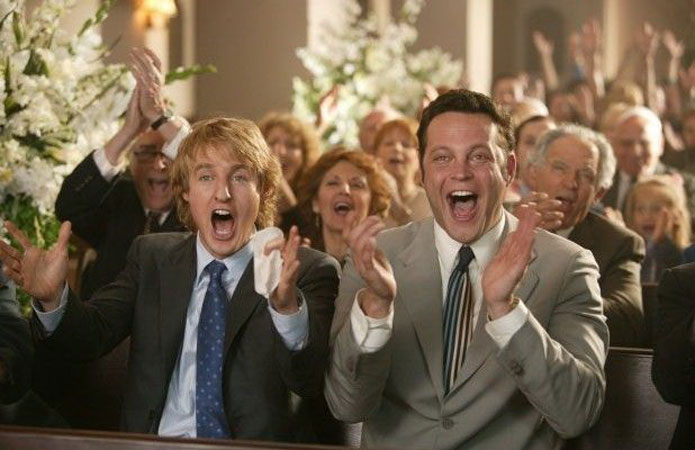 Echoing recent comments made by director David Dobkin and other co-stars, Vince Vaughn became the latest party involved in the 2005 hit comedy Wedding Crashers to reveal discussions have begun about a potential follow-up.

“Just recently, we’ve been more seriously discussing a sequel to Crashers, [Owen Wilson] and myself and the director and a producer,” Vaughn told Yahoo Entertainment while promoting his upcoming body-swapping horror-comedy Freaky. “There’s an idea that’s a good idea … for the first time, there’s kind of an original thought.”

Wedding Crashers starred Vaughn and Wilson as divorce mediators who, well, crash weddings to hit on women caught up in the romanticism of the nuptials. Co-starring Rachel McAdams, Isla Fisher, Christopher Walken, Jane Seymour and, at the time, a relatively unknown Bradley Cooper, the debauchery-fest grossed a whopping $288 million on a $40 million budget.

It’s taken 15 years, but no wonder its stakeholders want a rendezvous.

In July, Dobkin teased what the storyline could look like in an interview with Entertainment Weekly.

“Ten or more years later, all of a sudden these guys are in their mid to late 40s and they end up single — what do they do? That’s interesting to me, because I know guys in their mid to late 40s who have ended up single, whether it’s out of marriages that didn’t work out or they just didn’t find anyone to marry, and it’s a head trip for men, the idea of maybe I’m not going to be a dad, maybe I’m not going to be married,” said Dobkin, who says he has “played around” with a screenplay. “So it became a real cultural question and it yielded an interesting kind of center to the movie.”

“I think we can say it’s being written,” said Will Ferrell, who memorably cameos as Vaughn and Wilson’s mentor, Chazz Reinhold, told E! News in June.

Ferrell’s Eurovision costar McAdams said she’d be game to return for a Wedding Crashers 2. “I got to work with Owen again on Midnight in Paris, so that was super fun,” McAdams said. “And I worked with Vince again on True Detective, now I’m just remembering it. But those were very different. So yeah, it’d be nice to go back and have a romp.”

Looking back at the original film 15 years later, Vaughn told Yahoo Entertainment the film was just as fun to make as it looked.

“That was a blast to shoot,” he says. “We had a lot of fun and look, I think it’s always great If you can go, you know, make a movie with people that you like and be funny and, and have a good time doing that.”