Lori Loughlin is not a ‘wreck’ in prison, despite report 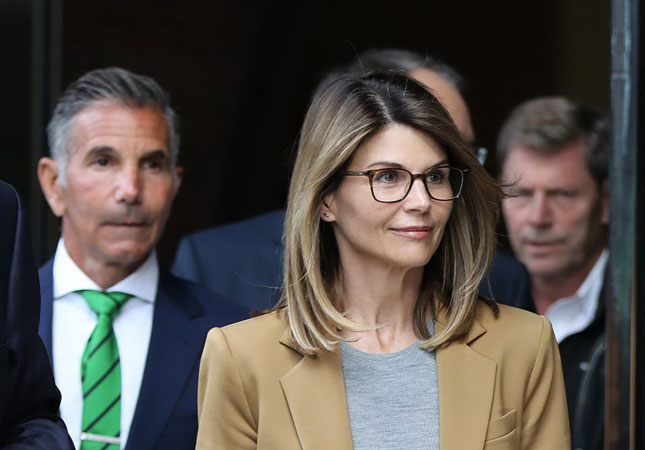 Reports that Lori Loughlin is a “wreck” in prison are greatly exaggerated. The Full House actress, 56, reported to the Federal Correctional Institution, Dublin in California late last month to get an early start on her two-month incarceration in hopes she’ll be home for the holidays — and start 2021 with that part of her sentence behind her. While Loughlin quarantines apart from the general population, standard protocol for new prisoners amid the pandemic, one report states she’s a “wreck” behind bars. The story claims she tried “to be brave” but is overcome with fear something “will go horribly wrong in prison” and her stay will be “prolonged.”

However, a source tells Yahoo Entertainment that there’s “no truth” to the report, which is a fabrication.

As noted, Loughlin is by herself for at least the first 14 days in the low-security prison. That’s not a celebrity perk, that’s what happens to all new prisoners and transfers so they can quarantine before being exposed to everyone else. In quarantine, Loughlin is unable to leave her cell or unit — with her meals being delivered in a brown bag. Currently, all visiting at the facility where Loughlin is has been suspended until further notice due to COVID-19. To make up for that, inmates have been afforded extra telephone minutes per month (500 vs. 300, all in 15-minute increments) at no charge to help make up for the lack of social visits. Though it’s unclear if Loughlin has phone privileges while in quarantine. (A prison spokesperson has not yet responded to Yahoo’s query.) When Loughlin’s cleared medically, she’ll likely be moved to the camp portion of the facility, where Desperate Housewives star Felicity Huffman did her time, also in the college admissions scandal, last year. She’ll wake up at 5 a.m., have a job (for instance: clerical work, food prep or cleaning) and some free time to exercise, take a craft class or get fresh air outside on the sports field.

If Loughlin has phone privileges, on her shortlist are probably her husband, Mossimo Giannulli, and two daughters, Olivia Jade and Isabella.

Meanwhile, Giannulli has until Nov. 19 to surrender for his own prison term — which at 5 months is longer than Loughlin’s. The pair pleaded guilty to paying $500,000 to get their daughters into the University of Southern California through an illegal “side door” which saw them passed off as crew recruits, despite neither participating in the sport. When Loughlin was sentenced in August, she told the judge she made an “awful decision” by going along with the scheme. She vowed to do “everything in my power to redeem myself” and to “give back for the rest of my life.”

Upon her early surrender, a Loughlin source told People magazine, “She hopes to be home by Christmas, but she’ll definitely be home by New Year’s. She had everything in order, so she decided a couple of days ago to report to prison. She can put this behind her as she goes into 2021.” The source also told the outlet, “She is going to set her jaw and do her time. Of course she’s dreading it, but she’s resigned that it’s the way to get this behind her. She’s already thinking about how 2021 will be better for her, and she’ll be able to move forward.” Further, “She’s going to learn what she can from the experience, and hopefully become an even better person from this. She’s open to learn the lessons that she needs to learn.”

Once Loughlin finishes her prison term, she’ll serve two years of supervised release and complete 100 hours of community service. A $150,000 fine was due prior to her surrendering for prison.