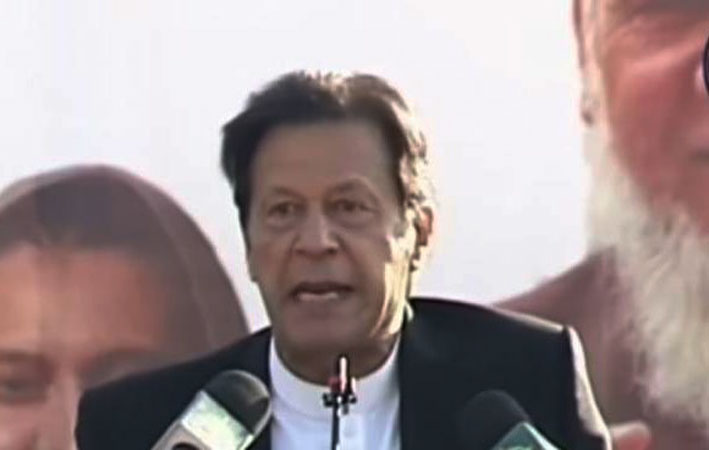 Prime Minister Imran Khan on Friday said that ensuring rule of law and making Pakistan a socio-economic welfare state was his foremost priority to achieve the goals of prosperity and development.

“The country will prosper only when all of its citizens treated equally before law and given across-the-board basic facilities of life,” the prime minister said in his address to public gathering, where he distributed Sehat Insaf Card among the poor. Under the programme, every household in the province will get free medical treatment up to Rs1 million.

The prime minister said the provision of facilities to public was, however, linked with strength of national exchequer previously plundered by the governments.

He regretted that all such ‘dacoit of the country’ had gathered at a platform to put pressure on him to acquit them from their crimes.

“They know that Imran Khan is never going to give them an NRO (National Reconciliation Ordinance), so they have started a dirty game of ridiculing the state institutions just to save their looted money,” he said.

He said the daughter of former prime minister Nawaz Sharif was using bad language about armed forces and intelligence agencies.

“As a social norm, we give respect to women, however she is taking advantage of this,” he said, adding that in any other country, such remarks could have landed her into prison.

The prime minister said it was a decisive moment for the country to take to task its leaders who plundered billions of nation’s money, but insisted to be treated above law.

He recalled that misappropriation of national kitty during previous tenures resulted in multiplying foreign debt from Rs 6,000 billion to Rs 30,000 billion, putting burden on the nation.

Prime Minister Imran Khan said the health card scheme was important in facilitating the common man to have easy access to public and private hospitals for free treatment.

He said the government was also working on providing affordable housing for people.

He said legal limitations that resulted in delay in implementing the low-cost housing scheme had now resolved and expressed the confidence that the project would materialize soon.

He mentioned the Civil Procedure Act passed in Khyber Pakhtunkhwa bound the cases to be resolved within a period of one year.

He said a prime minister was like a father figure who could guide his nation towards the path of righteousness.

He said following the path of teachings of Prophet Muhammad (Peace be upon Him), who was the greatest of persons and a leader, could bring goodness in the life and hereafter.

He said the model of State of Medina was a guiding principle where rule of law was supreme and all people enjoyed equal rights regardless of social status.

He said Swat would undergo massive development due to the opening of motorway and the prospects of tourism destination.

He lauded the Chief Minister KP for making Gabeen Jabba in Swat a new tourism destination and added that tourism would prove an important sector to attract foreign investment at a fast pace.

Chief Minister Khyber Pukhtunkhwa Mehmood Khan said the Sehat Insaf programme would cover the areas in four phases, i.e. Malakand in October, Hazara in December, Peshawar in January and then south region by the end of January.

He said the project was another milestone in Prime Minister Imran Khan’s vision of emulating the social-welfare State of Medina.

Minister for Communications Murad Saeed and member of National Assembly from Swat said the journey of prosperity had begun in Swat and Malakand with setting up of new educational institutions and health facilities.