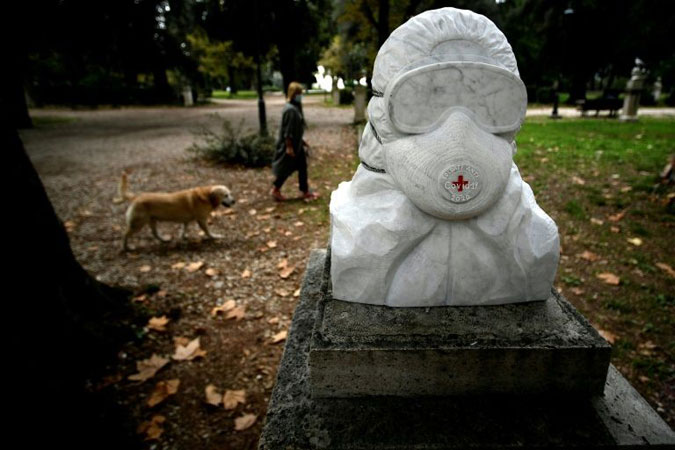 England became the latest European country to enter a second coronavirus lockdown on Thursday as the continent emerged as the region with the most infections and the United States set a new daily record with nearly 100,000 cases.

European governments have imposed tough new restrictions in an attempt to contain a fresh wave of the pandemic across the continent that has once again become the epicentre of the health crisis.

The latest data shows more than half of the some 500,000 fresh cases recorded globally each day last week were in Europe, and on Thursday the continent’s 11.6 infections surpassed Latin America and the Caribbean’s 11.4 million.

The World Health Organization’s regional director for Europe Hans Kluge said there had been a Covid-19 “explosion” in Europe.

“We do see an explosion… in the sense it only takes a couple of days to have over the European region an increase of one million cases,” he told AFP, adding: “We see little by little the mortality increasing as well.”

England’s 56 million people re-entered a lockdown on Thursday, after crowds queued outside soon-to-close shops, booked a last-minute haircut or headed to the pub for a final pint.

Some late-night revellers clashed with police, including in parts of London and the northern city of Leeds, as scepticism mounts about the return to stringent curbs.

The new restrictions are planned to run until December 2 and mandate a return to working from home where possible, along with the closure of all non-essential shops and services, while schools will stay open.

“To go through this again, just before Christmas, is actually death by a thousand cuts.”

To try to soften the blow, finance minister Rishi Sunak announced Britain will continue to pay up to 80 percent of wages for private-sector workers until the end of March.

Britain is among the world’s hardest-hit countries with just over one million virus cases and nearly 48,000 deaths.

‘Slap in the face’

Denmark announced it would cull its entire population of more than 15 million minks after a mutation of the new coronavirus was found to have spread to people from the otter-like mammals.

Prime Minister Mette Frederiksen, whose nation is the world’s largest exporter of mink fur, said the discovery could threaten the effectiveness of any future Covid-19 vaccine.

France meanwhile locked down last week in the face of soaring infections, but the mayor of Paris announced Thursday that stores selling alcohol and food to late-night shoppers will be forced to close at 10 pm to “avoid gatherings”.

In Italy, shops selling non-essential goods will be shut from Friday in hard-hit “red zone” areas and people largely confined to their homes except for work, health and emergencies.

Authorities have also announced a nationwide nighttime curfew despite growing anger in some regions which suspect other areas are getting off lightly.

“It’s a slap in the face for Lombardy,” raged the northern region’s president Attilio Fontana, a member of the far-right opposition League party.

Greece announced it will re-enter a three-week lockdown from Saturday, with Prime Minister Kyriakos Mitsotakis saying “it was a difficult decision”, but that something had to be done.

In Sweden — which has famously refused the mandatory lockdowns seen elsewhere in Europe — Prime Minister Stefan Lofven said he had gone into self-isolation after being in the “vicinity” of someone with Covid-19.

In the Netherlands, museums, cinemas, theatres, zoos and amusement parks were closed from 10pm on Wednesday for at least two weeks.

Russia officially has no plans for a lockdown but that resolve may be tested after Wednesday saw record daily infections of nearly 20,000 and a death toll of nearly 400.

The second wave has also stalled a nascent economic recovery in Europe, with the EU warning it will not return to normality before 2023. “The rebound has been interrupted,” the European Union’s economic affairs commissioner Paolo Gentiloni said as he unveiled a grim economic outlook.