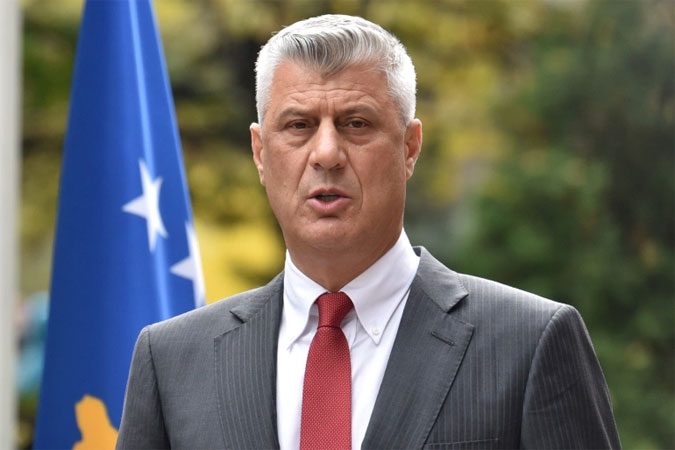 Kosovo President Hashim Thaci resigned with immediate effect on Thursday after learning that a war crimes tribunal in The Hague had confirmed his indictment for war crimes. Thaci told a news conference in the Kosovo capital Pristina that he felt his resignation was necessary “to protect the integrity of the state” because the judge at the Kosovo Specialist Chamber would not allow him to appear as president. Kosovo-based newspaper Koha Ditore reported on its website that Thaci arrived at Pristina’s military airport in the afternoon to be flown to The Hague after earlier arriving at the EU’s Kosovo rule of law mission, EULEX. The European Union issued a statement saying that it “takes note of the resignation of the President of Kosovo and welcomes the fact that he has agreed to cooperate with the Kosovo Specialist Chambers and the Specialist Prosecutor’s Office.” Prosecutors hold Thaci responsible for nearly 100 murders of civilians during the 1998-99 war when he was a commander of the Kosovo Liberation Army (KLA) guerrilla group which fought the Serbian police and army. He denies any wrongdoing. The tribunal was set up in 2015 to handle cases relating to the war that led to Kosovo’s independence from Serbia a decade later in 2008. The court is governed by Kosovo law but staffed by international judges and prosecutors.