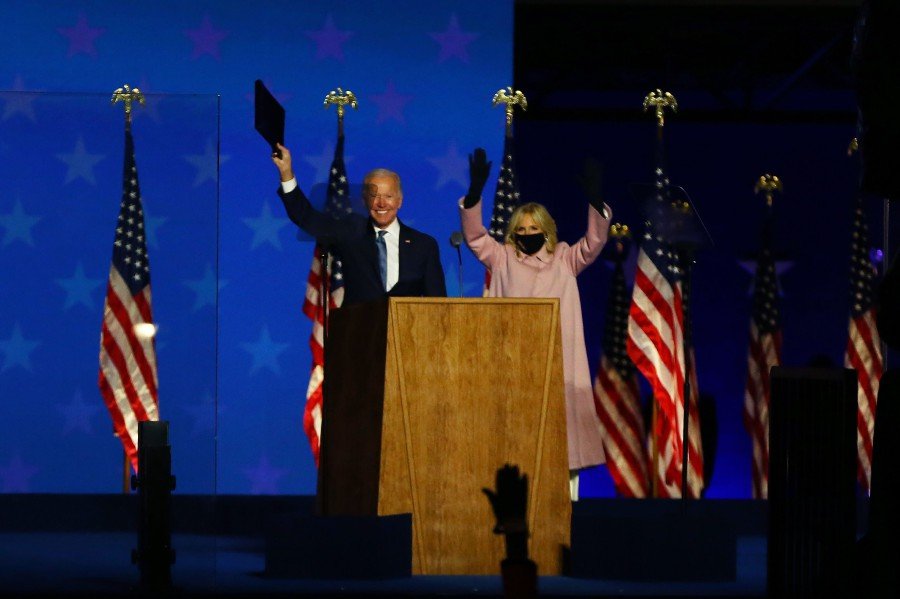 Democrat Joe Biden moved closer to victory in the U.S. presidential race on Thursday as election officials tallied votes in the handful of states that will determine the outcome and protesters took to the streets.

President Donald Trump alleged fraud without providing evidence, filed lawsuits and called for recounts in a race yet to be decided more two days after polls closed.

With tensions rising, about 200 of Trump’s supporters, some armed with rifles and handguns, gathered outside an election office in Phoenix, Arizona, following unsubstantiated rumors that votes were not being counted.

In Detroit, officials blocked about 30 people, mostly Republicans, from entering a vote-counting facility amid unfounded claims that the vote count in Michigan was fraudulent.

Anti-Trump protesters in other cities demanded that vote counting continue. Police arrested 11 people and seized weapons in Portland, Oregon after reports of rioting, while arrests were also made in New York, Denver and Minneapolis. Over 100 events are planned across the country between Wednesday and Saturday.

The presidential race was coming down to close contests in five states. Biden held narrow leads in Nevada and Arizona while Trump was watching his slim advantage fade in must-win states Pennsylvania and Georgia as mail-in and absentee votes were being counted. Trump clung to a narrow lead in North Carolina as well, another must-win for him.

Trump had to win the states where he was still ahead plus either Arizona or Nevada to triumph and avoid becoming the first incumbent U.S. president to lose a re-election bid since fellow Republican George H.W. Bush in 1992.

Edison Research gave Biden a 243 to 213 lead over Trump in Electoral College votes, which are largely based on a state’s population. Other networks said Biden had won Wisconsin, which would give him another 10 votes. To win, a candidate needs 270 votes.

Biden, 77, predicted victory on Wednesday and launched a website to begin the transition to a Democratic-controlled White House in January.

Trump, 74, has long sought to undermine the credibility of the voting process if he lost. Since Tuesday’s Election Day, he has falsely declared victory, accused Democrats of trying to steal the election without evidence and vowed to fight states in court.

Trump’s campaign fought to keep his chances alive with a call for a Wisconsin recount – which he would be entitled to given the slim margin there – as well as lawsuits in Michigan and Pennsylvania to stop vote counting. Michigan Secretary of State Jocelyn Benson, in charge of elections, called the Trump team’s lawsuit “frivolous.”

Trump’s campaign filed a lawsuit in Georgia to require that Chatham County, which includes the city of Savannah, separate and secure late-arriving ballots to ensure they are not counted.

It also asked the U.S. Supreme Court to allow Trump to join a pending lawsuit filed by Pennsylvania Republicans over whether the battleground state should be permitted to accept late-arriving ballots.

The maneuvers amounted to a broad effort to contest the results of an election that is still undecided two days after tens of millions of Americans went to the polls during the coronavirus pandemic that has upended daily life.

“They are finding Biden votes all over the place – in Pennsylvania, Wisconsin, and Michigan. So bad for our Country!” Trump posted on Twitter.

Biden said every vote must be counted. “No one’s going to take our democracy away from us, not now, not ever,” he said.

If victorious, Biden will face a tough battle to govern, with Republicans appearing poised to keep control of the U.S. Senate and likely block large parts of his legislative agenda, including expanding healthcare and fighting climate change.

U.S. stock index futures jumped on Thursday as investors were optimistic that a potential gridlock in Washington could reduce the chance of major policy changes, although concerns remained about the risk of a contested election.

The contentious aftermath capped a vitriolic campaign that unfolded amid a pandemic that has killed more than 233,000 people in the United States and left millions more jobless. The country has grappled also with months of unrest involving protests over racism and police brutality.

The United States set a one-day record for new coronavirus cases on Wednesday with at least 102,591 new infections, and hospitals in several states reported a rising tide of patients, according to a Reuters tally.

Supporters of both candidates expressed anger, frustration and fear with little clarity on when the election would be resolved.

In the nationwide popular vote, Biden was comfortably ahead of Trump on Wednesday, with 3.6 million more votes. Trump defeated Democrat Hillary Clinton in 2016 after winning crucial battleground states even though she drew about 3 million more votes nationwide.