Bosnia & Herzegovina, Pakistan ink accord on return of illegal migrants 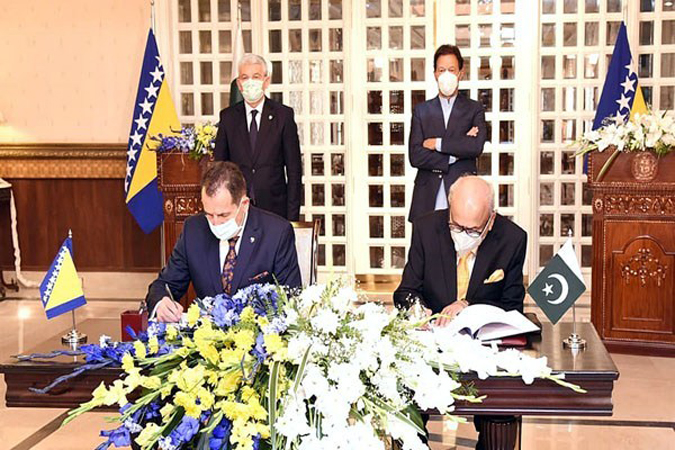 Pakistan and Bosnia & Herzegovina on Wednesday inked two accords of cooperation including an agreement on readmission of illegal Pakistani migrants and a Memorandum of Understanding on scientific cooperation.

Under the Agreement, a large number of illegal migrants from Pakistanis currently in Bosnia & Herzegovina through the readmission process will be returned and accepted by their country of origin.

Prime Minister Imran Khan and visiting Chairman of Presidency of Bosnia & Herzegovina Sefik Dzaferovic witnessed the signing ceremony, held here at the PM House. The agreement between the Government of Pakistan and Council of Minister of Bosnia & Herzegovina on streamlining the protocols of readmission of illegal Pakistanis was signed by Interior Minister retired Brigadier Ijaz Ahmed Shah and Bosnian Minister for Security Selmo Cikotic.

The Memorandum of Understanding (MoU) between Pakistan’s Ministry of Science and Technology and Council of Ministers of Bosnia & Herzegovina in the field of scientific cooperation was inked by Federal Minister Chaudhry Fawad Hussain and Bosnian Minister for Security Selmo Cikotic.

Meanwhile, Pakistan offered Bosnia & Herzegovina of training courses of its young diplomats at the Foreign Service Academy in Islamabad. The offer came as Foreign Minister Shah Mahmood Qureshi called on Chairman of the Presidency of Bosnia & Herzegovina Sefik Dzaferovic here on Wednesday, who is currently on a two-day visit to Pakistan.

Foreign Minister Qureshi expressed confidence that the cooperation at diplomatic level could strengthen relations between the two countries. The Foreign Service Academy, the training arm of Ministry of Foreign Affairs, provides training to the diplomats from friendly countries along with its own career diplomats.

The meeting also agreed that a vast potential existed to enhance cooperation, especially in fields of trade and investment, energy, science and technology, defence industry, education, and people-to-people exchanges.

Extending warm welcome to the Chairman on his first visit to Pakistan, the Foreign Minister underlined the fraternal nature of relations between Pakistan and Bosnia & Herzegovina marked by warmth and cordiality.

He said there existed remarkable goodwill for the people of Bosnia & Herzegovina among the people of Pakistan as both supported each other in times of need.

The Foreign Minister expressed condolences on the loss of precious lives in Bosnia & Herzegovina due to COVID-19. He apprised Chairman Dzaferovic of Pakistan’s strategy of ‘smart lockdown’ and Prime Minister Imran Khan’s stress on saving lives, securing livelihoods, and stimulating the economy.

Foreign Minister Qureshi briefed the Chairman on the grave human rights situation in Indian Illegally Occupied Jammu and Kashmir (IIOJK) as well as India’s illegal measures to change the demographic structure of the occupied territory, which was against United Nations Security Council (UNSC) resolutions, international law, and the 4th Geneva Convention.

The Foreign Minister thanked the Presidency of Bosnia & Herzegovina for taking a principled position on the Kashmir issue.

He also highlighted Pakistan’s positive contribution to the Afghan peace process and reaffirmed support for an Afghan-led and Afghan-owned leading to an inclusive, broad-based and comprehensive political settlement.

Both sides appreciated the strong cooperation at the multilateral fora, especially at the United Nations. It was agreed to continue such mutual support to each other.