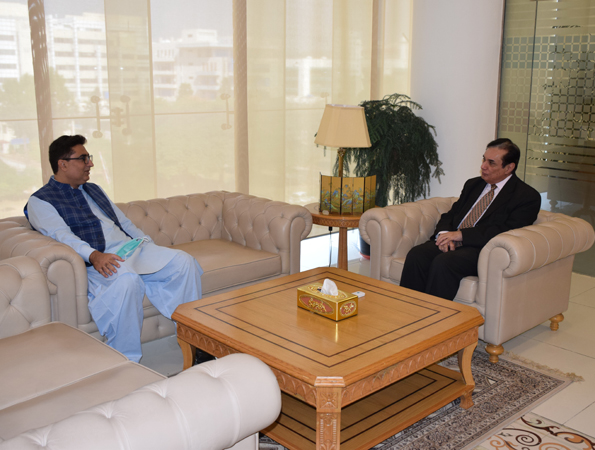 Justice (r) Javed Iqbal, Chairman NAB, Wednesday said that the watchdog has great respect for the business community which is playing a vital role in the economic development of the country.

Talking to Mir Naveed Baloch, president of Gwadar Chamber of Commerce, who called on him here at NAB headquarters, he said income tax and sales tax cases of the business community have already been referred to the Federal Board of Revenue (FBR). He said special desks already been established in NAB headquarters and regional offices to facilitate the business community. The desks have been directed to resolve businessmen complaints as per rules.

The Chairman NAB said that the country is indebted up to Rs100 billion, one perturb where the money had been spent as the economy was in shambles, no beds in hospitals, students were being denied admissions in universities/colleges. He said NAB was pursuing the cases of the people who were penniless 1980, but today they owned multi-storey buildings from where they got the money, especially a bike rider person’s amassed wealth and made towers in Dubai. NAB is taking action against all those as per laws who remained in government, were untouchables in the past and are now being questioned about their illegal actions, misuse of authority, assets beyond known sources of income, money laundering and loss to national exchequer. He said that NAB is making all out efforts to eradicate corruption from the society without caring about powerful and big fish having allegedly unprecedented stories on their credit. He said that NAB does not take direct action in bank default cases but State Bank refers cases to NAB. Banks take action against businessmen in case of default.

The Chairman NAB said that investigation of white collar crimes is very challenging talk as the crime was committed in one city and property exists somewhere else country but NAB officers are working with the realization that eradication of corruption from the country is their national duty. Criticizing fake housing societies, he said that the illegal housing societies have plundered the poor persons by posting alluring advertisements despite having no or little land. Chairman NAB said that NAB had taken notice of alleged corruption and irregularities in the allotment of industrial and commercial plots by Gwadar Industrial Estate Development Authority. The alleged illegal allotment has caused millions of rupees losses to the national kitty. Gwadar Industrial Estate Development Authority has not only jeopardized the economic development of the province. The Chairman NAB said that Gwadar is the gateway of Pakistan’s development. Economic development activities in Gwadar will indeed be helpful in the imperative for progress and prosperity of Balochistan as well as Pakistan. Chairman NAB said that providing legal investment opportunities to keen investors in Gwadar projects are the basic requirements of economic progress in the region. Chairman NAB directed DG NAB Balochistan to have held in abeyance the notices issued to GEDA and GDA. The Chairman NAB will visit Balochistan and subsequently will visit Gwadar where he will have briefings on the spot to know the factual position as per law.

Earlier, Mir Naveed Baloch, President Gwadar Chamber of Commerce, Gwadar, Balochistan apprised the problems of the business community of Gwadar to Chairman NAB. He appreciated Justice (r) Javed Iqbal, Chairman NAB’s efforts for eradication of corruption as well as addressing problems of business community as per law and assured his full support to Chairman NAB for NAB’s firm resolve for eradication of corruption from Pakistan so that dream of corruption free Pakistan could be metalized through collective efforts of all segments of society.