Disneyland is closing as a result of France’s national lockdown

* Disney said, ‘In line with the latest direction from the French authorities, Disneyland Paris will be closing end of day on October 29’ 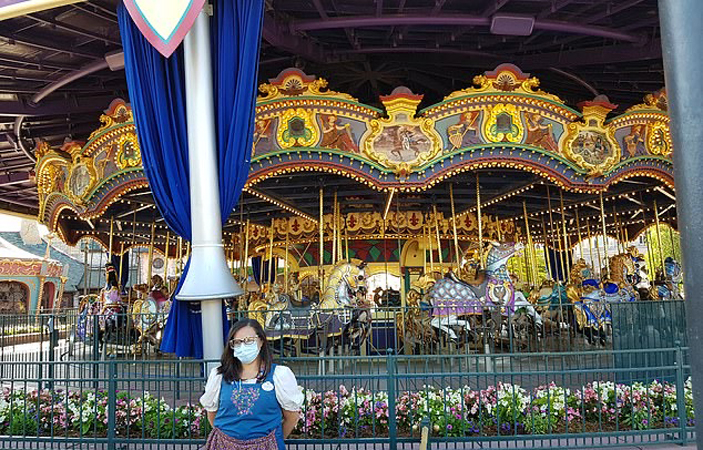 Disneyland Paris will shut at the end of the day due to France’s national lockdown, it has been announced.

The park said that the decision had been made to adhere to government guidelines, but added that it hoped to be open for the festive season.

Disney said: ‘In line with the latest direction from the French authorities, Disneyland Paris will be closing end of day on October 29.

‘In anticipation of celebrating the Christmas holiday season we will be taking reservations from December 19 – January 3 and hope to be open based on prevailing conditions and government guidance at that time.

‘Disneyland Paris will be closed from January 4 through February 12. Please check back on the website for regular updates. If you have a booking with us during the above-mentioned periods, please check here for our latest commercial conditions.

‘We thank you for your continued loyalty and understanding during this difficult period.’

Earlier in the year, MailOnline Travel had a sneak peek of the park before it reopened on July 15, following France’s first lockdown.

Twelve miles of safety signage, about two miles of plexiglass and 2,000 hand-sanitising stations had been installed.

And guests had been having socially distanced selfies with characters via ‘selfie spots’.

The announcement of the temporary closure comes as Emmanuel Macron’s top scientific adviser said that his target of slashing France’s coronavirus infections to 5,000 a day is impossible to achieve in the month-long lockdown that was announced last night.

Professor Jean-Francois Delfraissy said France would ‘need more time’ to bring infections down from their current rate of nearly 40,000 a day, meaning the lockdown may have to continue beyond December 1.

‘By December 1, we will not be at 5,000 infections per day. I can tell that to you straight away today,’ the head of the government’s scientific advisory council said.

French schools will stay open, but the stay-at-home measures for adults are as strict as in the spring, with written paperwork needed to go outside for shopping, medical care or one hour a day of exercise.

Macron said a curfew in Paris and other major cities had failed to stem the tide of infections, claiming that 400,000 people would die of Covid-19 if drastic action were not taken.

‘Our target is simple: sharply reducing infections from 40,000 a day to 5,000 and slowing the pace of admissions to hospital and intensive care,’ he said.

The French leader called the new restrictions ‘heartbreaking’ but said he ‘could never stand by and see hundreds of thousands of our citizens die’.

Bars, shops and restaurants are closing entirely again while France’s government is urging businesses to have employees work from home ‘five days a week’.

Macron, 42, said some shops could be allowed to open in mid-November if the situation improves – but his scientific adviser’s warning raises the prospect of lockdown measures continuing up to Christmas.

France’s current average is 39,700 cases per day, a figure which has more than doubled from 19,700 only a fortnight ago, with daily deaths also surging to nearly 250 per day.