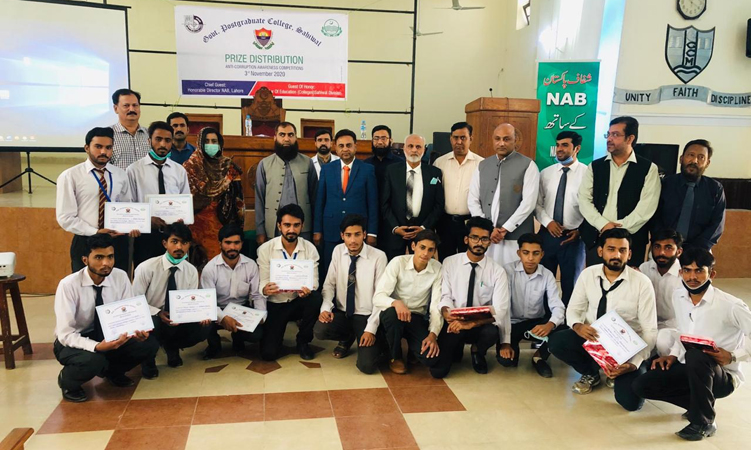 The students were given the opportunity to express their thoughts over the topic “Anti Corruption/Accountability” and “Insdad-e-Badunwani/Ehtisaab” both in English and Urdu languages. The College level students participated in the contest with full dedication and passion and highlighted the importance of Accountability Institution in the way to eradicate the menace of corruption from Country.

While addressing to the students, Director NAB Lahore stated that Officers of NAB has left no stone unturned for eradication of corruption from society. At yet, the students have also a very pivotal role to play in the cause of eradication of this menace of corruption if they fight against corruption while considering it a moral obligation. In this way, the society will be able to disown the corrupt elements in future.

NAB Lahore’s A&P Wing organizes different kinds of competitions among students viz Speech, Poetry, Essay Writing, Painting and Posters Competitions amongst students of School, College and University level with the intention to create awareness against corruption and its ill effects on development of Nations.

The declamation contest winning students were awarded with Merit Certificates, whereas, on International Anti-Corruption Day event the winning students would be also be presented with Cash Prizes and Shields. All these competitions would remain continued till commencement of International Anti-Corruption Day on 9th December, 2020.