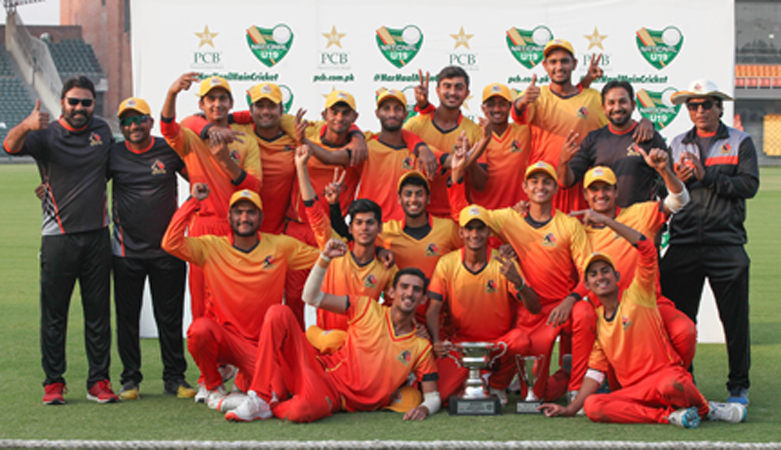 LAHORE: Northern presented the National Under-19 One-day Tournament title to Sindh on a silver platter when they lost their last nine wickets for 38 runs to lose the final by 53 runs at the Gaddafi Stadium here on Monday. Chasing 243 runs in 50 overs for victory, Northern were cruising at 151 for one before they were mesmerised by wrist-spinner Aaliyan Mehmood to be spun out for 189 in 44.3 overs. Aaliyan Mehmood returned figures of 10-0-45-4 to not only pick up the player of the final award, but also finish the tournament as the third most successful bowler with 24 wickets, including four four-fers. He averaged 15.6, while his economy-rate remained at 3.69.

Left-arm spinner Faisal Akram of Southern was the most successful bowler with 27 wickets, including two five-fers, while Mubasir Khan of Northern ended the tournament with 26 wickets at an average of 12.42, including two four-fers. Faisal was later declared best bowler of the tournament, while Mubasir for his 26 wickets and 332 runs was named player of the tournament. After Hassan Abid Kiyani departed early, Mohammad Shoaib Khan and Abdul Faseeh stitched up a 147-run second-wicket partnership to put Northern on course for a comfortable victory. But the dismissal of Shoaib Khan, who scored 84-ball 71 with six fours, and Abdul Faseeh within a space of four runs opened all floodgates as Sindh bowlers got on top of Northern batsmen to run through the innings.

Abdul Faseeh, who became one of the two Adeel Meo’s victims, scored 70 with five fours from 99 balls. The 17-year-old, who was adjudged best batsman of the tournament, finished the competition as the most impressive and consistent batsman with 524 runs, including a century and five half-centuries. Sindh’s Mubashir Nawaz was the second most successful batsman with 390 runs, followed up by Khyber Pakhtunkhwa’s Maaz Sadaqat (363 runs). Besides Aaliyan, Zameer Shah took two for 26, Adeel Meo bagged two for 32 and Talha Ahsan snapped up two for 36.

Earlier, and after being put into bat, Sindh were helped by wicketkeeper-batsman Ghazi Ghouri and Rizwan Mehmood to a respectable 242 for eight after they were in a spot on bother at 93 for four. Rizwan had held the top-order together with a quality 53 from 87 balls with six fours and a six, and later, Ghazi, in association with Kashif Ali (38 off 39 with five fours and a six), added 70 runs for the seventh wicket. Ghazi contributed 62 from 83 balls with seven fours. For Northern, Faizan Saleem and Mubasir Khan equally shared four wickets between them conceding 19 and 47 runs, respectively. The National Under-19 Three-day Tournament will now commence on Thursday. In the first round action, Balochistan will take on Sindh at the LCCA, Lahore, Central Punjab will meet Southern Punjab at Rana Navedul Hasan Cricket Academy in Sheikhupura, and Northern will square off against Khyber Pakhtunkhwa at the Lahore Country Club in Muridke.

Sindh beat Northern by 53 runs at the Gaddafi Stadium