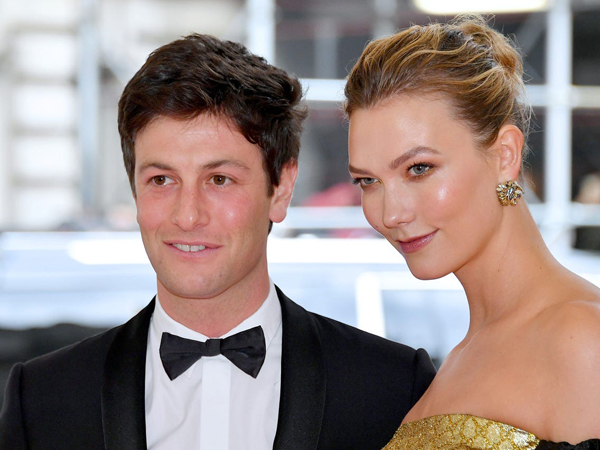 Karlie Kloss and Joshua Kushner have a lot to look forward to in 2021! According to multiple outlets, the model and businessman are expecting their first baby together.

The happy news comes just days after Mr. and Mrs. Kushner celebrated their second wedding anniversary. On Oct. 18, the Project Runway star wrote on Instagram, “I fall more in love with you every day. Happy 2nd anniversary.” Their Oct. 2018 nuptials were a star-studded affair attended by Joshua’s brother, Jared Kushner, and his wife, first daughter Ivanka Trump. They all witnessed Karlie exchange vows with Joshua in a custom Dior gown.

All in all, the wedding was an intimate event shrouded in secrecy. And the fact that it came less than four months after confirming their engagement helped keep the chic event a secret. But Karlie would hold a second wedding in June 2019, this time with all the friends and family who missed out on the party the first time around.

Orlando Bloom, Katy Perry, Derek Blasberg and more joined the newlyweds in Wyoming for the second wedding, which was the opposite of Karlie’s first ceremony. The celebs wore cowboy hats and danced under a disco ball all night, with Derek joking on social media, “May your marriage be as intense and long lasting as my hangover from this weekend.” Karlie would later share a glimpse into her and Joshua’s life together in a conversation with designer Diane Von Furstenburg, sharing, “I absolutely met, married and am madly in love with my soulmate… He is truly my partner. He is my partner in life. He is my best friend. He is my other half. I didn’t know that I could love someone in this kind of way and I feel like I’ve almost grown up with him. I met him when I was 19 and I think there’s a lot of growing into myself that I still was doing when I first met him and still am to this day.”

“[Joshua] loves me but he’s the most supportive person in my life…He wants me to chase my dreams. He helped me dream bigger.” She continued, subtly referencing his ties to President Donald Trump, “I really followed my heart on choosing to be with the person who I love despite any complications that came with it. For me, it was worth it to fight for that.”

Joshua’s support extends to Karlie’s voting choices too. In January, the model shared her political stance in an interview with Andy Cohen on Watch What Happens Live With Andy Cohen, explaining, “I’m sure I’m not the only person in this country who does not necessarily agree with their family on politics… I voted as a Democrat in 2016 and I plan to do the same in 2020.” Her comments came after a Project Runway contestant Tyler Neasloney protested criticism of his dress. To be specific, judge Brandon Maxwell told the designer, “It’s definitely wearable in some place that is neither Paris nor Montauk or Martha’s Vineyard… I cannot see Karlie wearing it anywhere, honestly.”

Tyler replied, “Not even to dinner with the Kushners?”

Karlie told Andy that she wasn’t upset by Tyler’s comments, explaining, “My man and I have been through a lot together and I’m so proud that he’s my partner. It’s not been easy but it’s worth it. And I would make that same decision a million times again.” E! News reached out to Karlie’s rep for comment.