With ropes and wooden guns, returning Armenians train for war 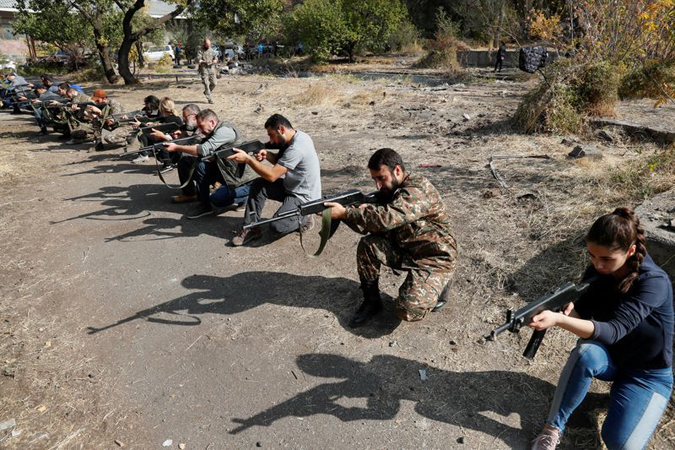 When conflict broke out in Nagorno-Karabakh last month, Aghasi Asatryan was thousands of kilometres away in Germany, embarking on a career as an IT specialist.

The 29-year-old Armenian national immediately applied for vacation, citing a family matter, and flew back to Yerevan, his home town.

On a hillside above the Armenian capital, he began combat training at a camp founded by veterans of a previous war in Nagorno-Karabakh, a mountainous enclave controlled by ethnic Armenians but internationally recognised as part of Azerbaijan.

“My plan is to get prepared and to go to the front line,” Asatryan said. Slung across his shoulder was a wooden copy of an AK-47 assault rifle, a training aid given to each volunteer at the camp.

More than 1,000 people have died in a month of clashes in Nagorno-Karabakh, which Azerbaijan considers to be illegally occupied.

It rejects any move to leave Armenians in control there, while Armenia regards the territory as part of its historic homeland and says the population there needs its protection.

Asatryan moved to Germany seven years ago as a student, avoiding conscription. He has neither served in the army nor held a gun before and said he could not tell his bosses that he was going back home to fight.

“My German employers wouldn’t understand a man who would want to go to war,” he said. “But I know that we, the Armenians, wouldn’t have survived so many centuries without understanding that every man should fight for his homeland.”

Asatryan is one of hundreds of volunteers from as far afield as Argentina and the United States to have joined the VOMA Survival School in recent weeks.

Its founder, Vova Vartanov, fought in the 1991-94 war in Nagorno-Karabakh in which about 30,000 people were killed. He has returned to the front line as leader of a volunteer battalion.

Reuters reporters saw dozens of men and women in the camp, split into groups for lessons on using hand grenades and repelling a gun attack. Some volunteers were practising rock-climbing using ropes and the concrete wall of a waste dump.

Before the latest fighting broke out on Sept. 27, the school would attract 20 to 30 people at a time for training in readiness for a renewed war. One of the instructors, Karapet Aghajanyan, said “hundreds” from the Armenian diaspora had now come.

Armenia’s defence ministry said this month that around 10,000 people volunteered to take up arms on the first day of fighting.

Azerbaijan’s defence ministry said 55,000 volunteers were registered between July 12 and July 22 after fighting in another region. It said that information about more recent volunteers was classified.

Knarik Karaminasyan, a 21-year-old English teacher from Yerevan, decided to join the volunteers as soon as she learned that women were welcome and could be sent to the front line as medical workers or cooks.

“It was hard at the beginning and I even had nightmares,” she said. Now she feels more comfortable.