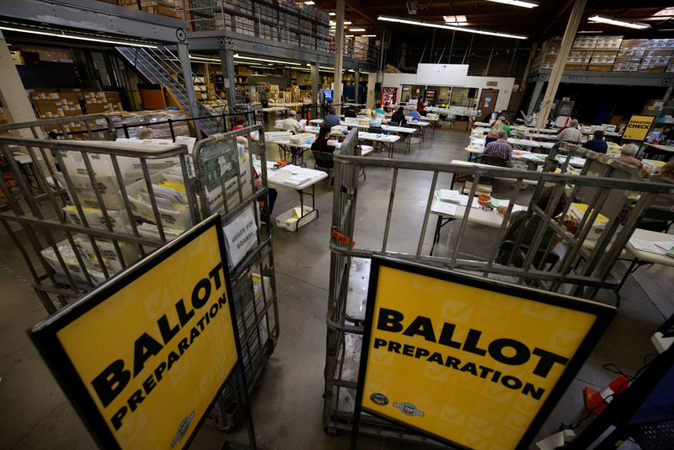 Imagine that the polls have closed in Florida, counties are beginning to report early vote counts, and it looks like former Vice President Joe Biden is way ahead. An hour later, Pennsylvania counties begin to report and it seems to be a slam dunk for U.S. President Donald Trump.

Don’t be fooled, voting experts and academics say. Early vote counts in the most competitive, battleground states can be particularly misleading this election because of the surge in mail-in or absentee ballots, and the different ways that they are processed.

The states that count mail-in votes before Election Day are likely to give Biden an early lead, since opinion polls and early voting data suggest those ballots favor the Democrat. Conversely, the states that do not tally mail-in votes until Nov. 3 will likely swing initially for Trump.

These so-called red or blue mirages will disappear as more ballots are counted, though experts say it may take days or even weeks to process the huge number of mail-in ballots, spurred by voters seeking to avoid crowded polling stations because of the COVID-19 pandemic.

“Be patient,” said Gerry Cohen, a member of the Wake County Board of Elections in North Carolina. “You need to count all of the votes, and that’s going to take some time.”

Here is what to expect in some of the most bitterly contested states that will determine the next U.S. president:

Florida and North Carolina allow election officials to begin processing mail-in ballots weeks before Election Day, and the results of those counts are expected to be released as soon as polls close on Nov. 3.

If both states follow that schedule, it is likely that Biden will appear to be ahead initially, as the latest Reuters/Ipsos opinion poll shows that people who already have voted in Florida and North Carolina support the Democratic challenger by a more than 2-to-1 margin over the president.

In both states, a majority of people who plan to vote in person on Election Day support Trump. (Click here for the battleground tracker: https://tmsnrt.rs/37sTr3p)

A blue mirage is not expected to last long in either state. Experts say they expect Florida and North Carolina to finish counting most of their mail-in and in-person ballots before the end of the night.

Texas, Iowa and Ohio – which Trump won easily in 2016 but polls show could be competitive this year – also allow early processing of mail ballots, so could show a similar blue mirage, according to experts. All three states are expected to finish counting most ballots on Nov. 3.

In Pennsylvania, Michigan and Wisconsin, mail-in ballots cannot be counted until Election Day. While Michigan did recently pass a law that allows many cities to start processing mail-in ballots, such as opening ballot envelopes, the day before the election, they cannot begin to count votes.

Because mail-in ballots typically take longer to count than ballots cast in person, the initial results could skew Republican. Then, some experts say, expect a “blue shift” as election officials wade through the piles of mail-in ballots.

Pennsylvania and Wisconsin may be slowed by their lack of experience with high volumes of mail-in ballots. About one in 20 votes in the two states were cast by mail in the 2018 congressional election, compared to a quarter of Michigan’s votes and about a third of Florida’s.

Pennsylvania’s vote counting could go on for days. Democrats in the state recently won a victory in the U.S. Supreme Court to allow officials to accept mail-in ballots up to three days after the election as long as they are postmarked by Nov. 3.

“Something I’m prepared for on election night is for Pennsylvania to look more Republican than it may actually be, whoever ends up winning the state,” said Kyle Kondik, a political analyst at the University of Virginia’s Center for Politics.

Ballots in Wisconsin and Michigan must arrive by Election Day, although litigation is under way over whether the states should count ballots that arrive late if postmarked by Nov. 3.

EXPECT TO WAIT FOR ARIZONA

On election night in 2018, Arizona Republican Martha McSally appeared to be on the road to victory in the state’s U.S. Senate race, telling her supporters she was going “to bed with a lead of over 14,000 votes.”