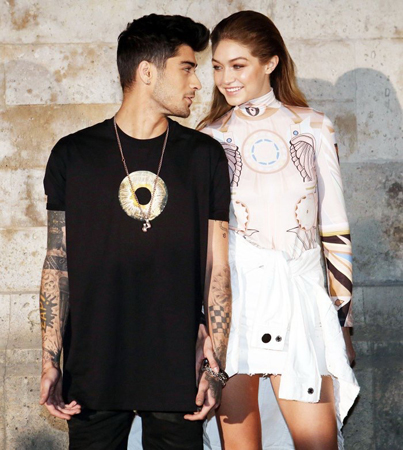 British singer Zayn Malik and supermodel Gigi Hadid feel closer than ever following the birth of their daughter who has entirely redefined their relationship.

Reports reveal that the birth of their daughter has led them to spend quite a lot of time together and has also helped them create a deeper bond.

“Zayn and Gigi’s relationship is better than ever—their communication, the time they spend together,” the source said to Us Weekly. “They’ve never looked happier.”

Back in September, a source revealed how the baby has left an impact on Zayn who, after becoming a father, has become a whole different person emotionally. The source quoted: “Zayn was very emotional when their baby girl was born. It was an emotional and special moment for him. He expressed that he is forever changed and would never disappoint her or Gigi. He wants to be the best father possible and is so excited.”

Zayn and Gigi, who had been on-off in the past, are “in the best place right now.”

While being a parent is a full-time job, the lovebirds make sure they get some time to themselves too. Both of them have enjoyed a few date nights after their baby’s birth where Hadid has prepared meals for her beau.

On October 8, Hadid shared a picture of their first date night meal and added a cute caption along with the picture. “Mom and dad’s first date night,” Hadid wrote. “She’s in the other room w Oma, but miss her sm lol.”

The couple have had a few date night since then and seem all into their new relationship.