Bhopal, the capital of Madhya Pradesh, saw massive protest against French President Emmanuel Macron for his defence of blasphemous cartoons and highly objectionable and arrogant statements against Islam and Muslims. 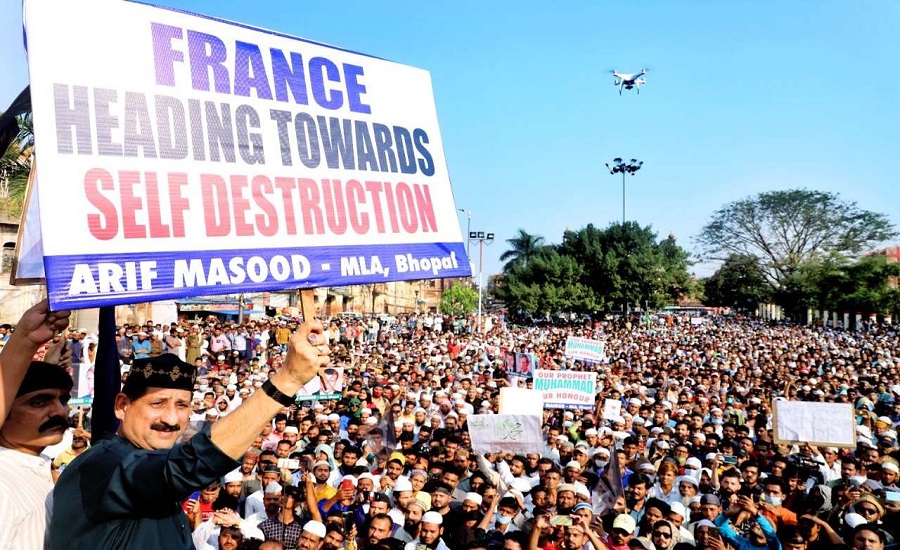 On Thursday, thousands of people marched through the streets showing their strong rejection of the French stance.

Similar protests were held in Mumbai, Bhiwandi, Hyderabd and at Aligarh Muslim University.

This is happened in Mumbai India 🇮🇳 pic.twitter.com/gE7037Yl91

The Bhopal protest was led by Congress MLA Arif Masood. The protestors gathered at the historic Iqbal Maidan, holding placards that said ‘Prophet Muhammad is our Honour’, ‘France is heading towards self-destruction’ and stomped on pictures of the ‘devil’ Macron that were scattered on the ground.

Issuing an official statement condemning the killing of a French teacher and personal attacks on Macron, the ministry of external affairs said, “We strongly deplore the personal attacks in unacceptable language on President Emmanuel Macron in violation of the most basic standards of international discourse.”

“We also condemn the brutal terrorist attack that took the life of a French teacher in a gruesome manner that has shocked the world. There is no justification for terrorism for any reason or under any circumstance,” it said.

Notably, Modi expressed solidarity over the attack in France and condemned Congress for leading anti-Macron protests.