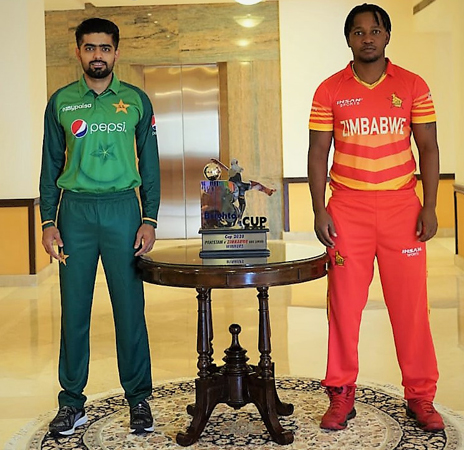 RAWALPINDI: Former world champions Pakistan, led by Babar Azam, will take on Zimbabwe for an ICC World Cup Super League Series starting at Pindi Stadium here from Friday (today). With the first one-day international, both the teams will also begin their qualification campaign for the ICC World Cup 2023 in India. A record of losing just one out of 19 ODIs over six previous home series against Zimbabwe would give new captain Babar confidence ahead of their opening series of the Super League, introduced to bring context to ODI cricket and to confirm the top seven teams with direct spots for the World Cup along with hosts India. Cricket-starved fans in Pakistan would ordinarily turn out in droves to cheer on their team, but the limited-overs series with Zimbabwe will be a subdued affair as the games take place behind closed-doors in a ‘bio-bubble’ designed to keep players separated from the public. Pakistan are already well-versed with COVID-19 protocols from their recent tour of England, but it will be something new for Zimbabwe to contend with during the three ODIs and three T20Is in Rawalpindi between October 30 and November 10. This series will be Pakistan’s eighth on home soil since a 2009 militant attack on Sri Lanka’s team bus prompted other touring sides to avoid the country.

The Pakistan Cricket Board yesterday announced a 15-member squad for the first ODI. The squad was announced by the PCB in a tweet. Vice-captain Shadab Khan will miss the match as a medical team of the PCB Wednesday had ruled him unavailable for selection. Shadab felt stiffness in his left upper-leg during the first intra-squad warm-up match on October 23 in Lahore. Now the vice-captain will undergo treatment and rehabilitation regime and an update in this regard will be provided ahead of the second ODI.

Babar, while talking in a virtual press conference on Thursday, heaped praises on the rising youngsters Haider Ali and Abdullah Shafique. The prolific batsman believed that the duo were very different in their approach while claiming that the side had included some outstanding youngsters. “Haider and Shafique future looks really bright. I like them very much. They both possess different techniques. Haider plays aggressively and tries to play at an impressive strike rate. Shafique takes his time but plays his natural game once he is in. He tries to dominate. Both are different but the youngsters that we have are outstanding,” said Babar. The 26-year-old stated that he would use his ODI experience while leading the national T20I side for the very first time. “In T20Is, you always try to play aggressively. You need to make quick decisions. On the flip side, players get some time in ODIs. This will be my first series and I will try to apply my experience leading in T20Is to ODIs. My philosophy is simple, if you back and support your players completely then they will give you 110 percent. We will work hard for good results,” he added.

Babar, who was player of the series in their last ODI series against Sri Lanka played over a year ago, is the top-ranked player from either side in the ICC Men’s ODI Player Rankings. He is ranked third among batters and the only one in the series who is in the top 10 of either the batting or bowling rankings. Babar is 143 runs away from 4000 ODI runs. Should he get there in fewer than nine more innings, he will beat Hashim Amla to become the fastest man to the landmark. Left-handed opener Imamul Haq has a good chance of moving back into the top 10, as he is just two points behind England’s Jonny Bairstow and four others too are within 13 rating points. Fakhar Zaman is four places behind Imam in 15th position, while Haris Sohail (32nd) and Mohammad Hafeez (44th) will be others in the focus from the rankings perspective. With Mohammad Amir not named in the squad for the series, fellow left-arm fast bowler Shaheen Afridi, a star of the Pakistan side that played in the ICC Under-19 Men’s Cricket World Cup 2018 in New Zealand, is the home side’s leading bowler in 24th position. Spinners Shadab Khan (28th) and Imad Wasim (33rd) follow in the list.

Zimbabwe captain Chamu Chibhabha said that now was the right time to bring young players into his aging squad. We are going to try and push some youngsters into the team,” he said, describing how valuable it is for rookie batsmen Wesley Madhevere and Milton Shumba, both 20, to share the dressing room with seasoned veterans such as Brendan Taylor and Sikandar Raza. “Hopefully the youth take the opportunity and grab the match experience – how to prepare, how to go about the game.” Zimbabwe are boosted by the return of paceman Blessing Muzarabani after a two-year stint with English county Northamptonshire – but a vast chasm still separates the sides with the hosts winning the last eight encounters.

Chibhabha believes that the visitors can upset Pakistan during the series. He admitted that Zimbabwe were up against a strong Pakistan outfit. “Pakistan are definitely a very strong team at home but we have the ability to upset them. It all depends on that particular day.” He also warned against writing off Zimbabwe before the start of the series. “We can beat any team on any given day. We have beaten Pakistan in the past, so it all depends on how things turn out on a particular day. You can’t predict anything before the start of the series or a match,” he said. “We have faced a challenge and that is to qualify directly to the 2023 World Cup. All are focused to give their best and win matches here. I am sure we have a chance against Pakistan,” he added.

For Chibhabha-led Zimbabwe, Sikandar leads the batters’ rankings in 47th position, 11 places below his career-best 36th position that he attained five years ago. Brendan, who has been in the top 10 in the past, is in 50th place while Sean Williams is 57th. Fast bowler Tendai Chatara, who played in the ICC Under-19 World Cup 2010 in New Zealand, is ranked 43rd among bowlers and would be looking to move back towards his career-best 23rd position in April 2015. Spinners Williams (64th) and Sikandar (70th) too have attained better rankings in the past.